Our little man had a birthday earlier this month. It was a Skylander themed party. If you've never heard of Skylander's before you probably don't have an elementary school boy in your house. He picked this "love" up from his fellow classmates. He really had no idea what Skylanders were all about when he requested it, but we ran with it anyways. At one point I'm pretty sure I was better versed in the whole thing more then he was.

He invited 7 friends. Which is a good number for him, because he still gets a little overwhelmed with large loud groups. The weather was fantastic, since I had played all of the games to be outside.

There are 8 elements in the world of Skylanders. The kids played 8 games each themed by an element.

The first game they played was from the tech element. We had "gold" coins hiding in the backyard. Each kiddo needed to find 6 coins. After each game they got to get their "passports" punched. 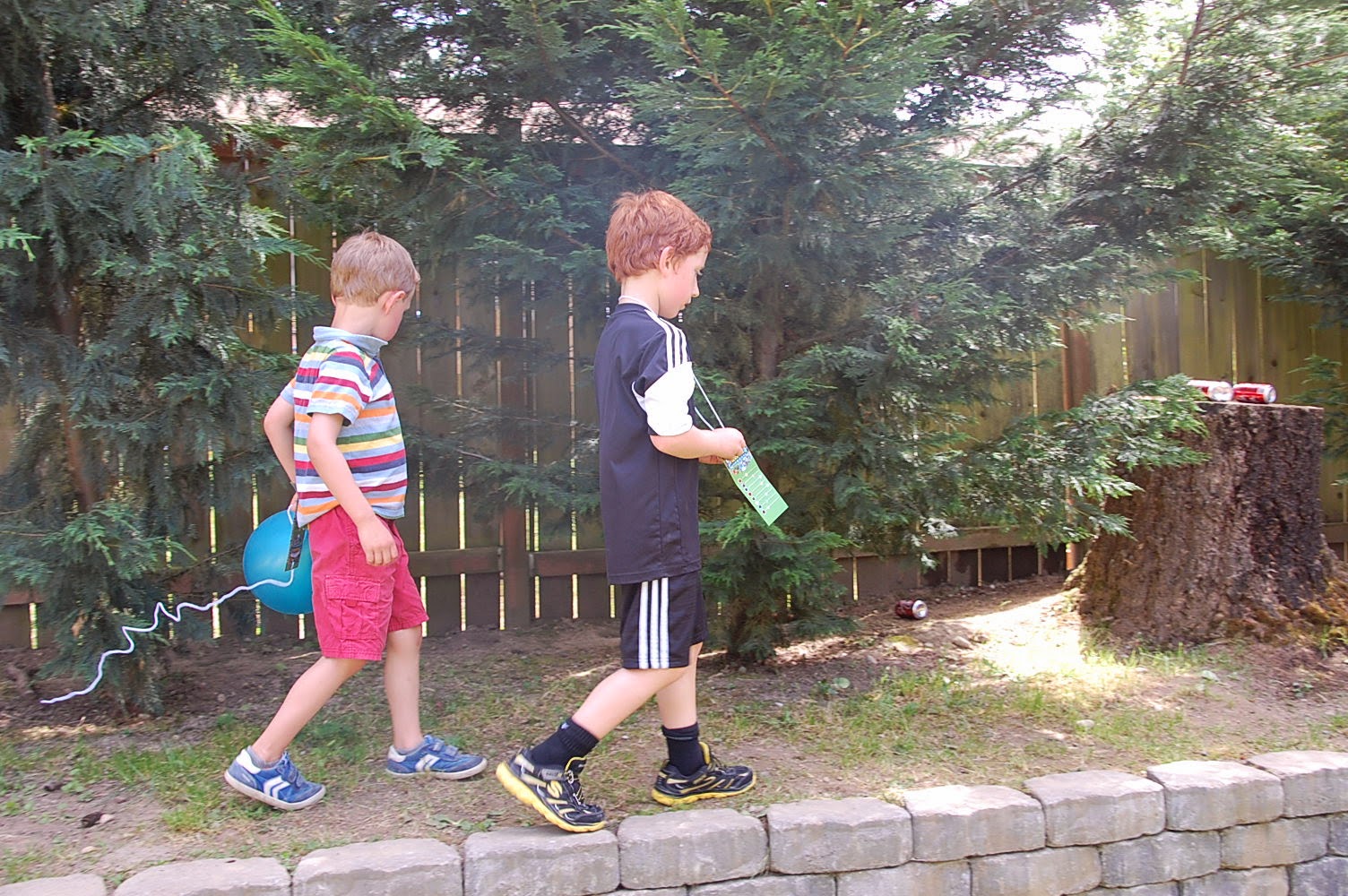 The second game they played (I forgot to get pictures of) was for the element of wind. They tossed water balloons down from the deck into a big bucket. They had 3 attempts and there was lots of laughing.

Next up was the water element. They had water soakers that they used to knock over the cans on the stump. 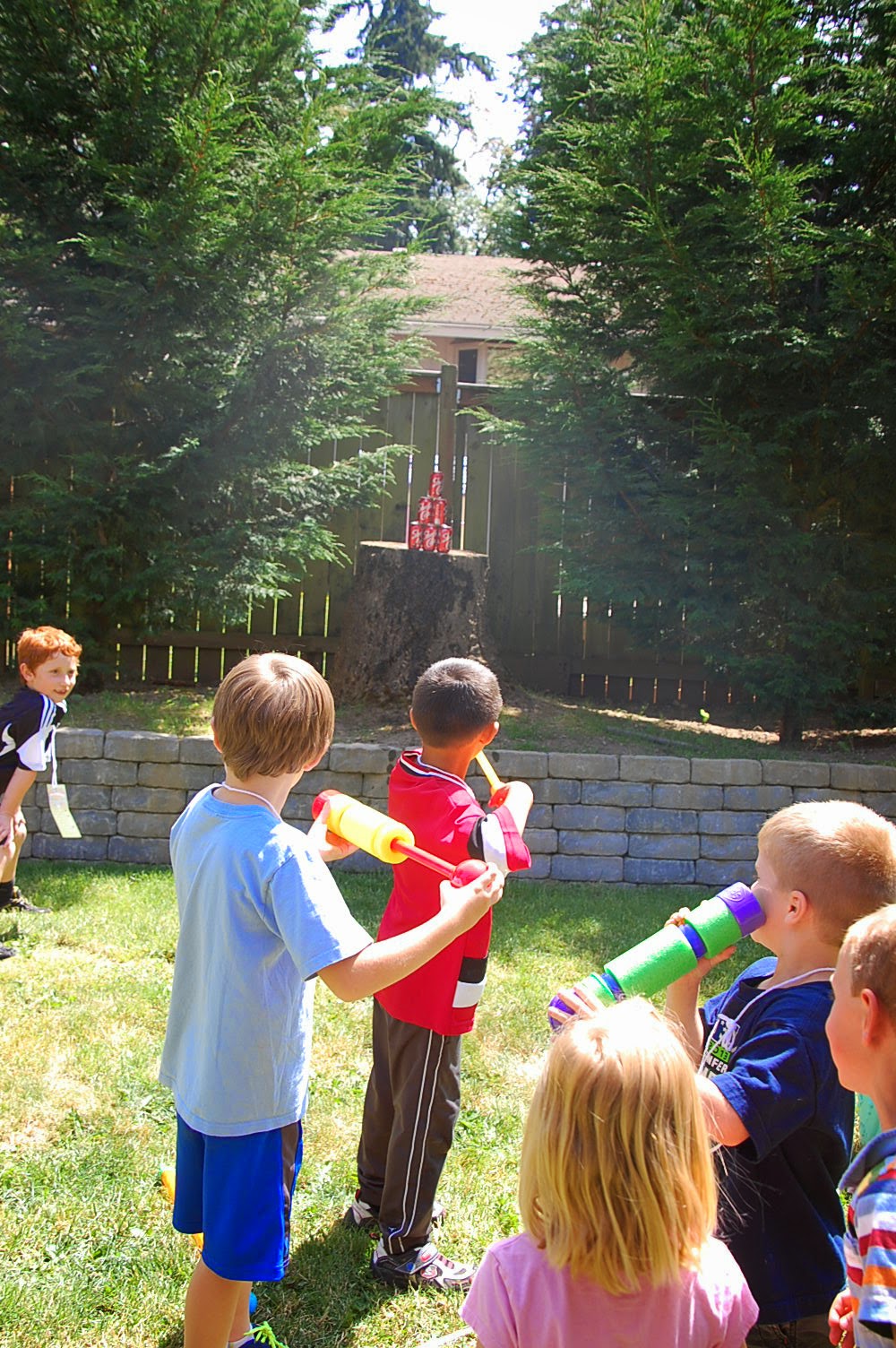 Then the life element was up. They each had a balloon that they had to pop with their bottoms. Each game was so funny to watch them. They were excited about all of it. 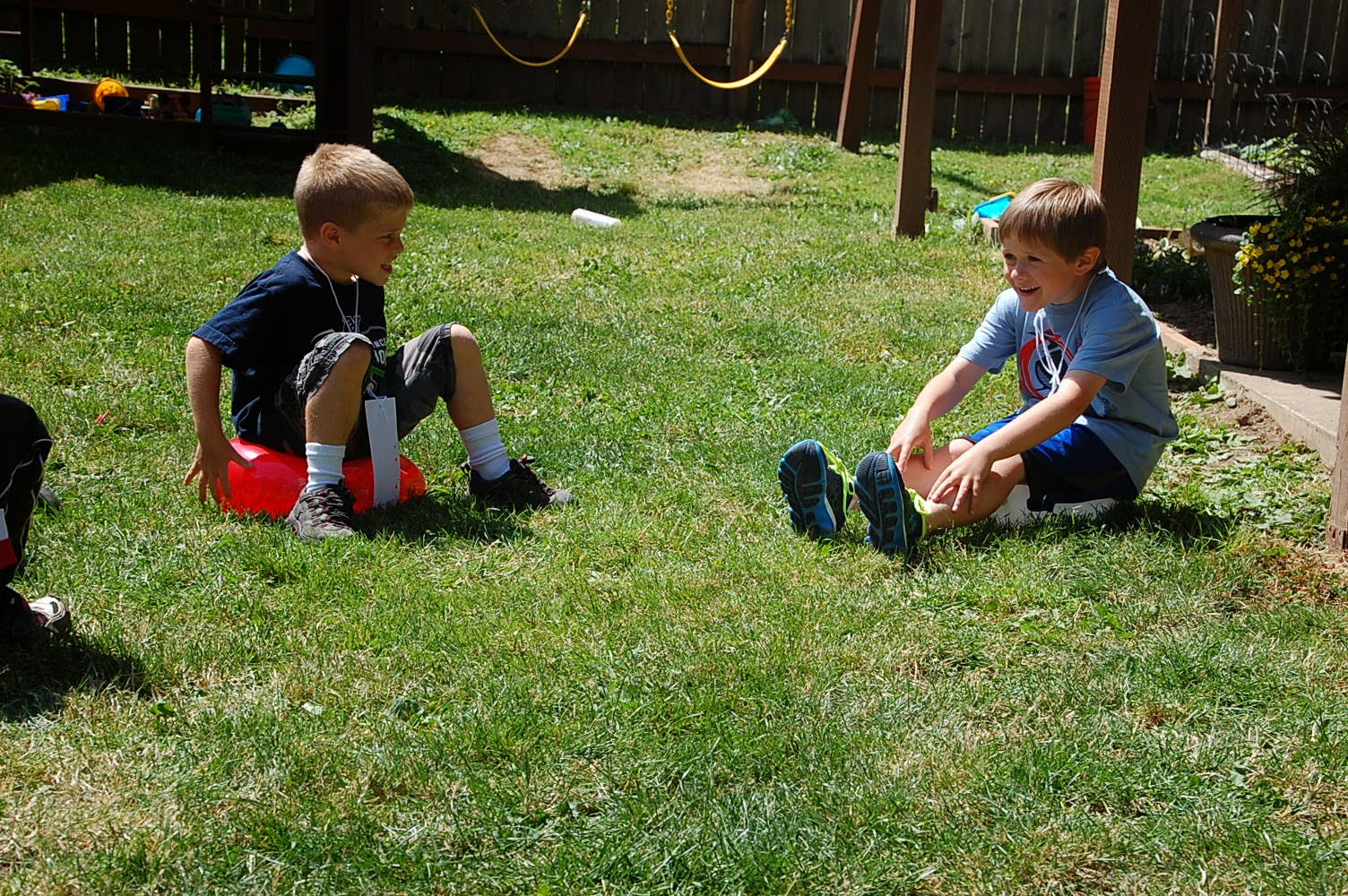 Next up was the earth element where there were plastic bugs frozen that they had to smash out and rescue them. 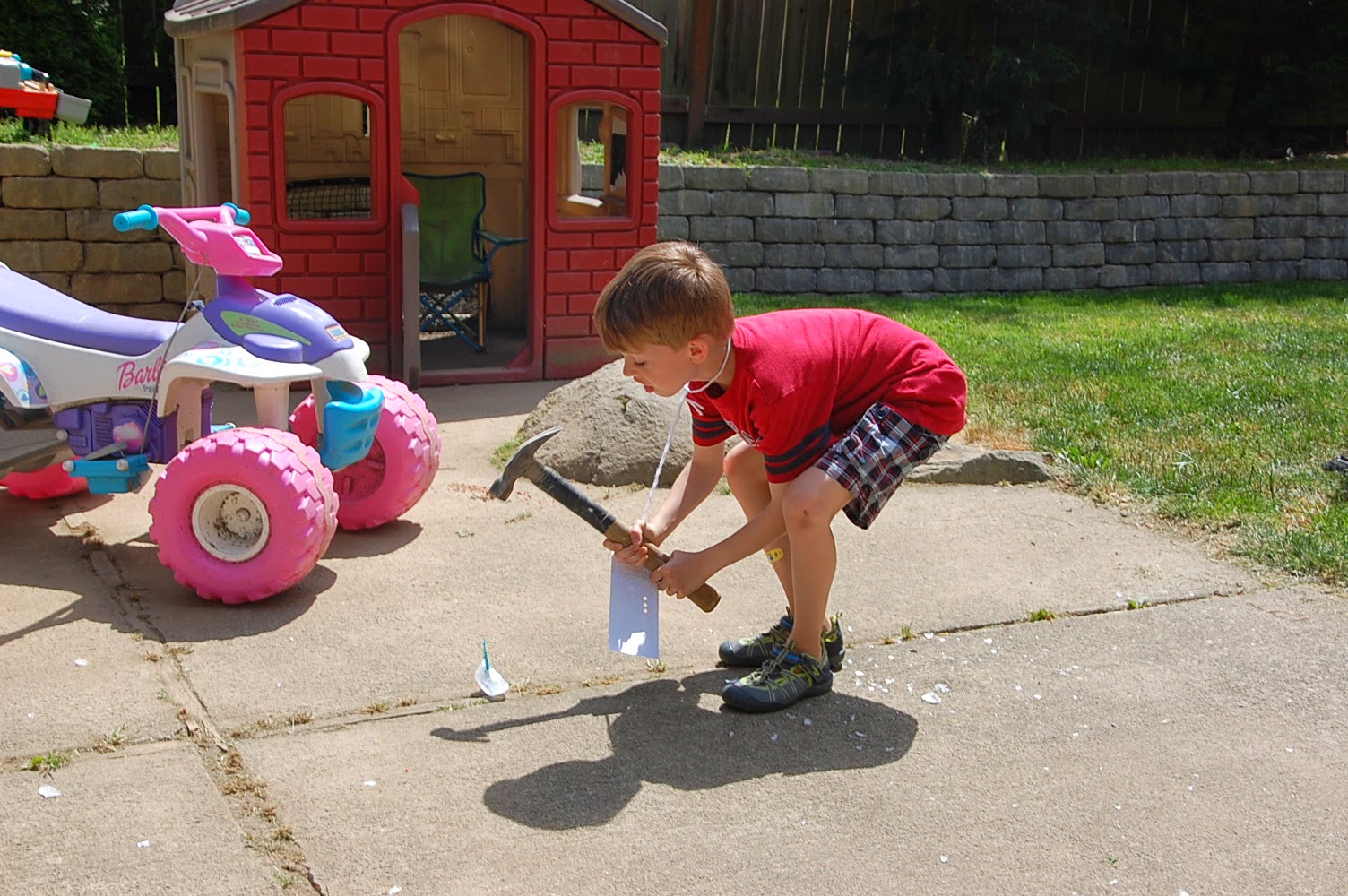 Then we had the element of fire. Where they took "fireballs" and tossed them through the circle of fire. 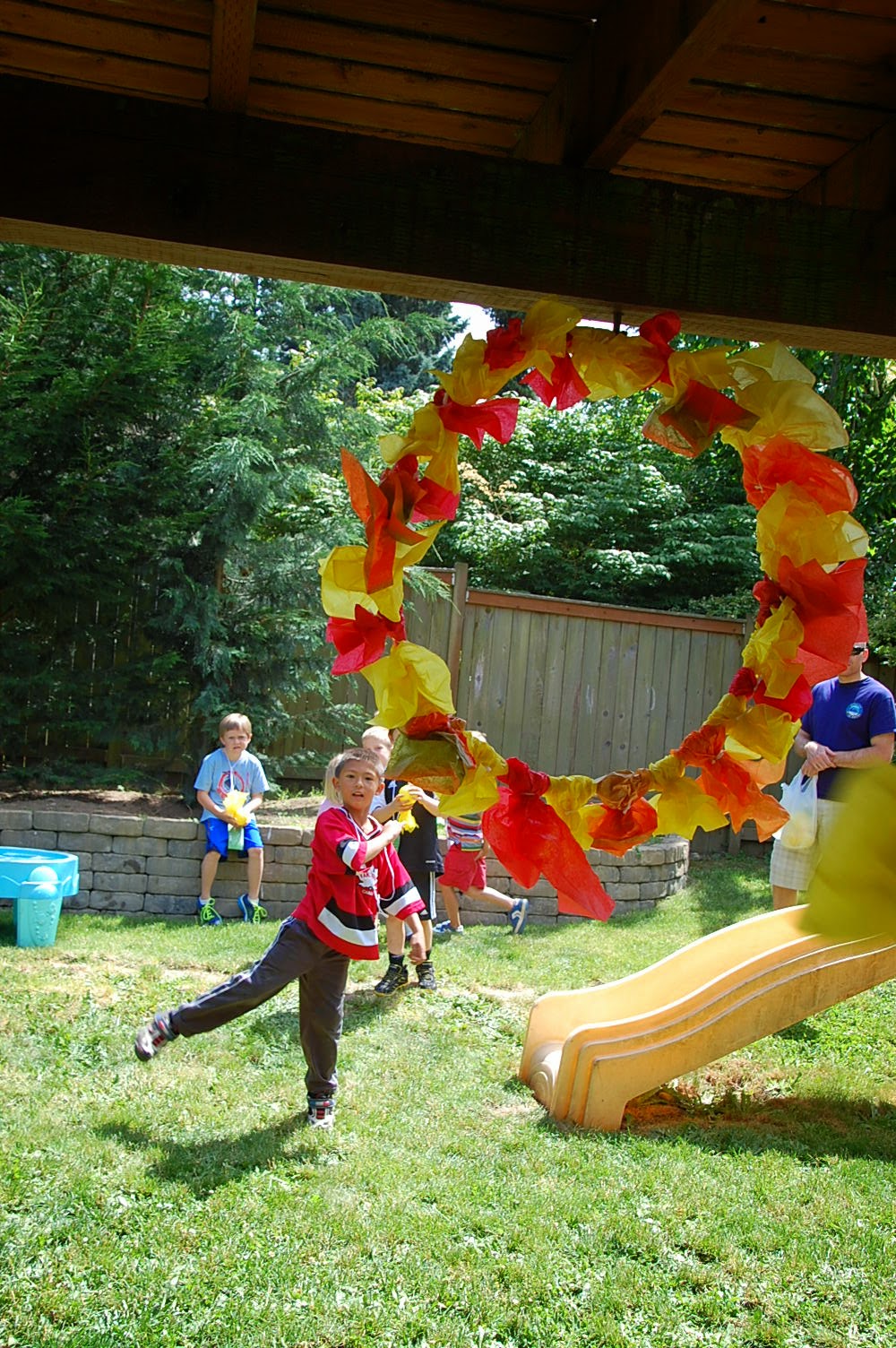 Adalyn even had a go at each game. 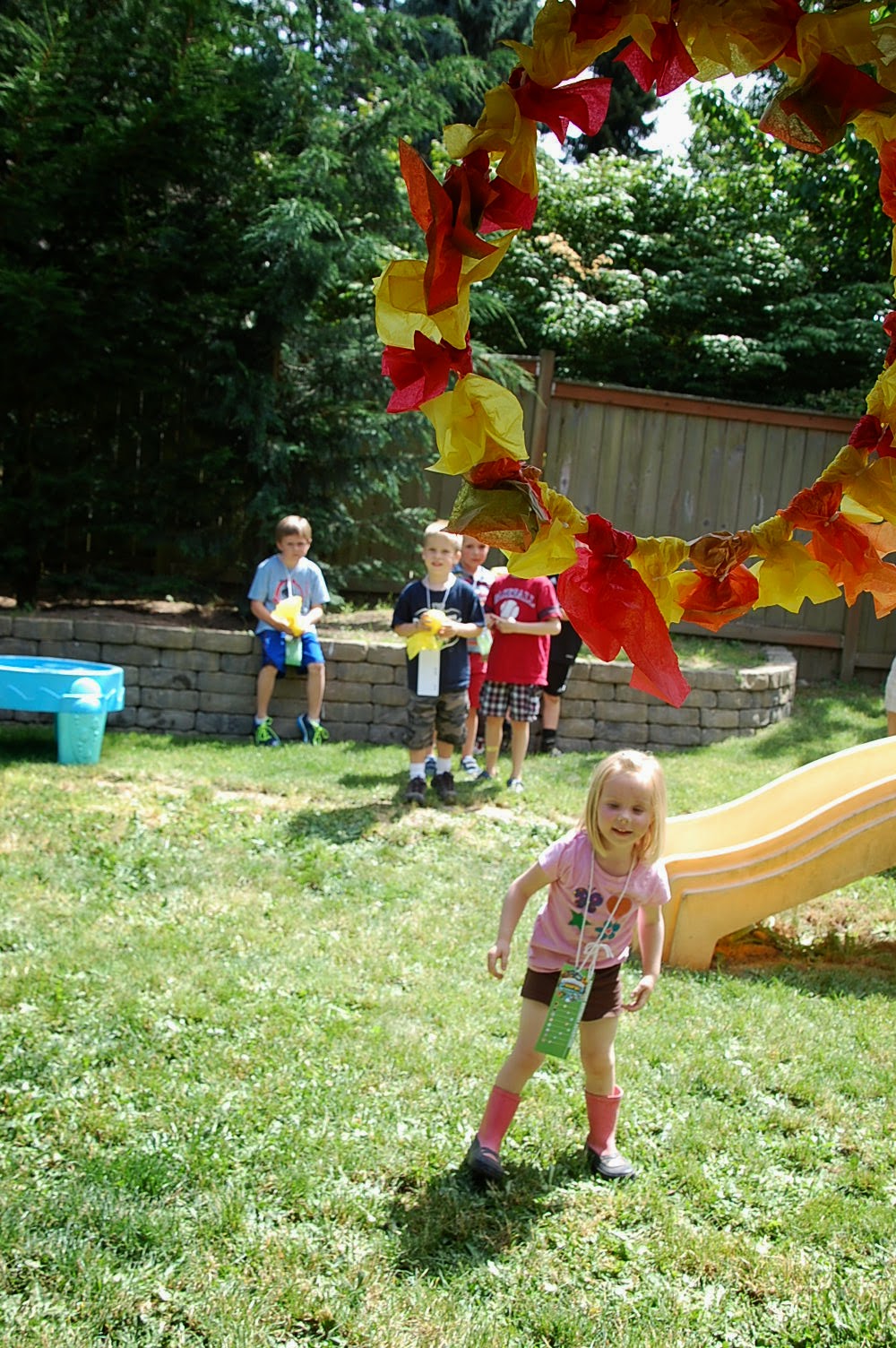 This game was using the element of undead. Each boy had a balloon tied to their leg and they had to keep it from getting popped by the other kiddos. Everyone kept theirs alive, except poor Adalyn who got hers popped instantly. She was so upset and still talks about how her balloon got popped. 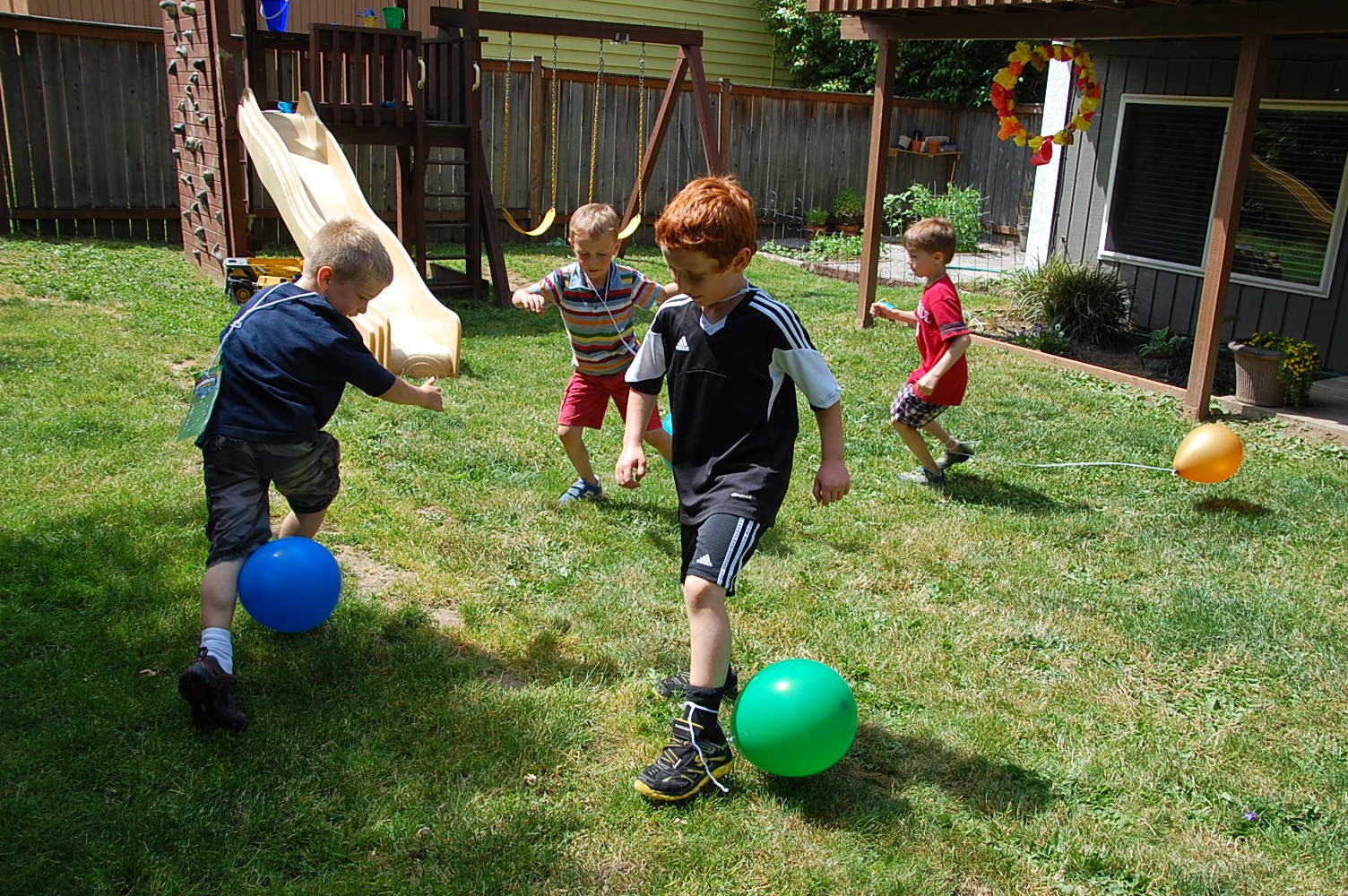 I thought I had saved the best game for last with the element of magic. I had diet coke and mentos and the idea is that when you put the mentos in the coke it makes a big fountain of fizz. Sadly, I had purchased small containers of coke and they didn't fizz very much. 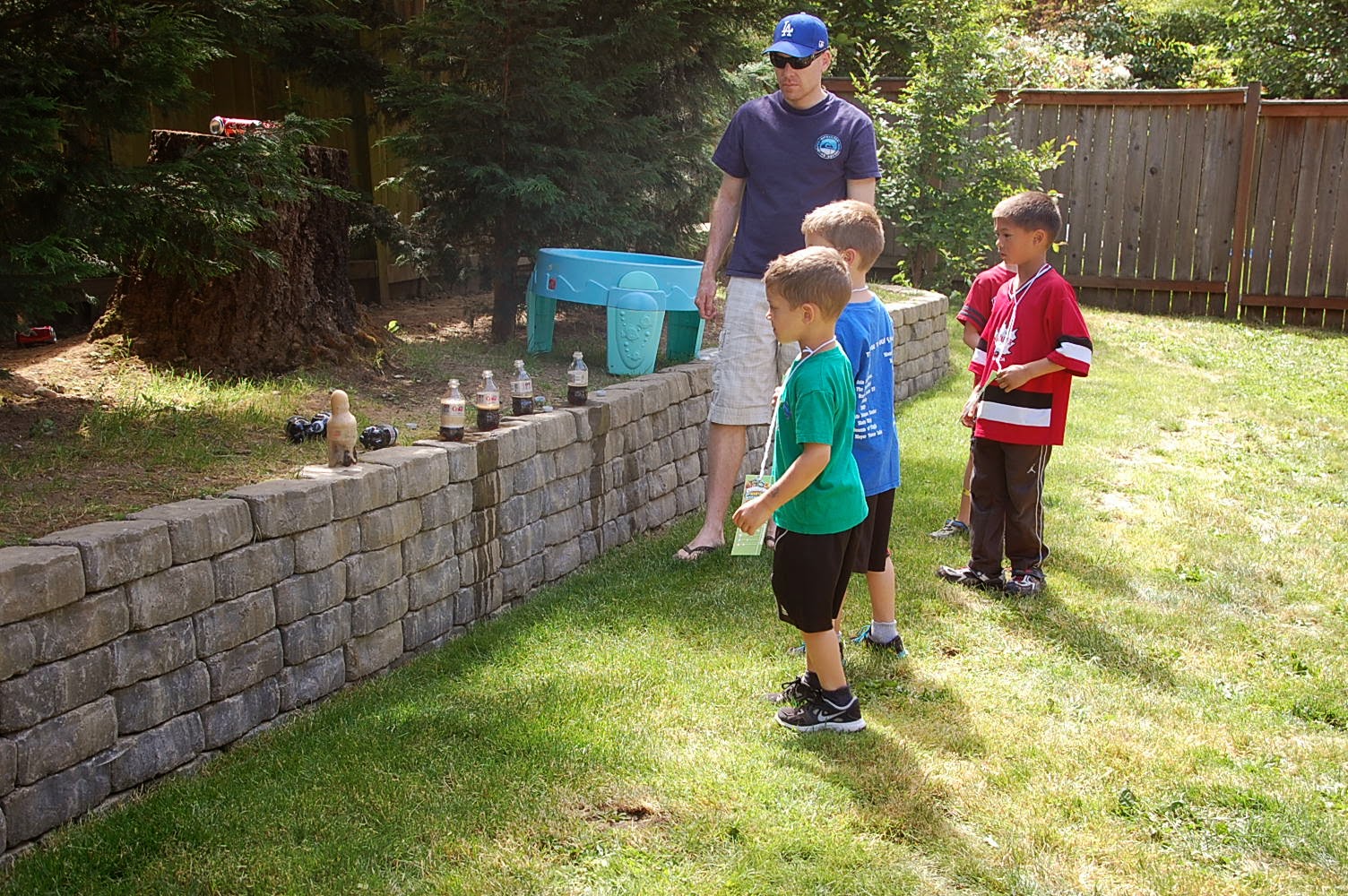 We followed the games with with some snacks and cupcakes. Shane requested chocolate cupcakes with white frosting and a cherry on top. 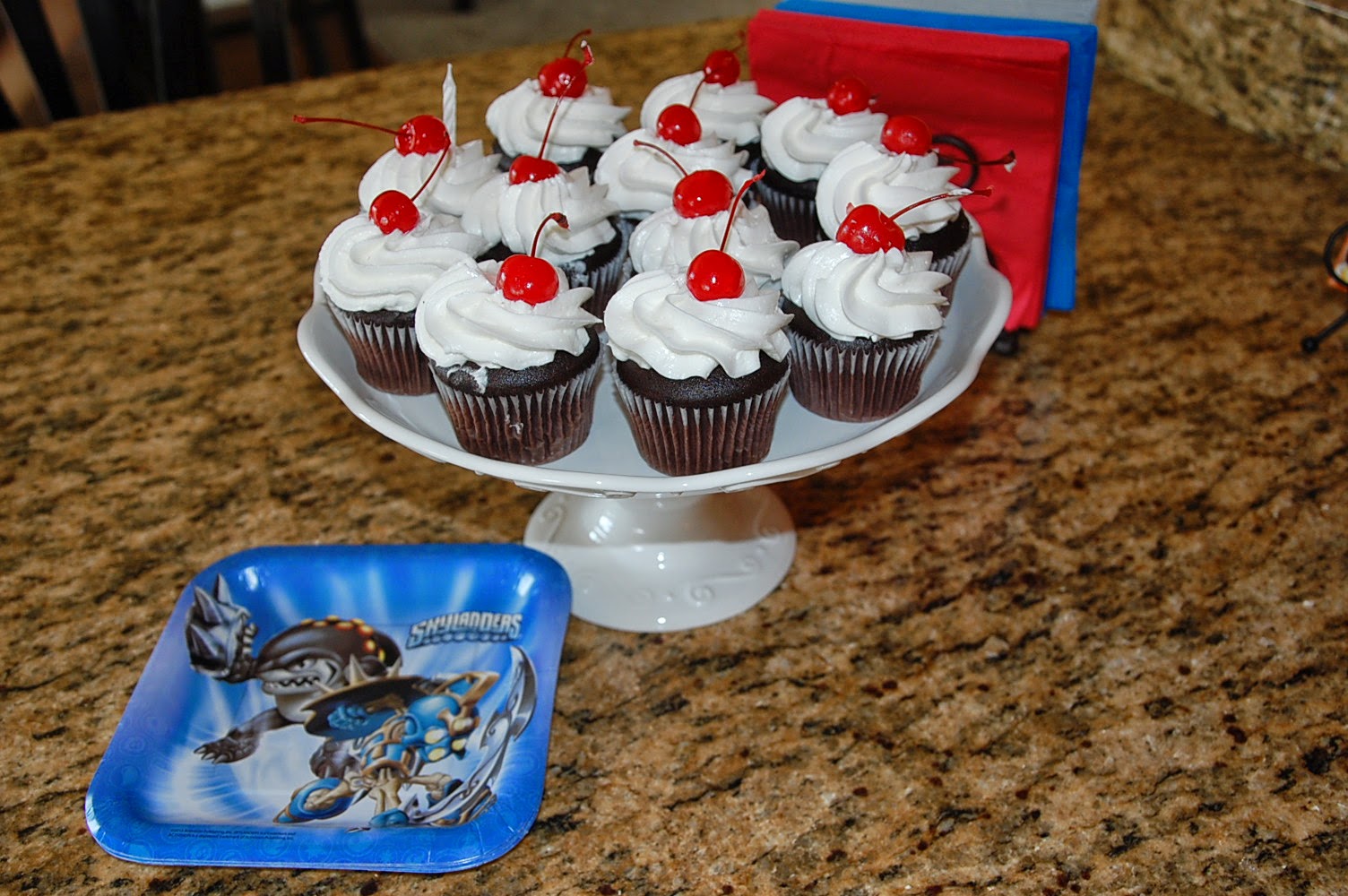 I let Shane pick the menu for the party.  He requested raspberries, cherries, provolone and cheddar cheese, salami, ritz crackers and graham crackers with frosting. I didn't deny his gluten ridden menu either. 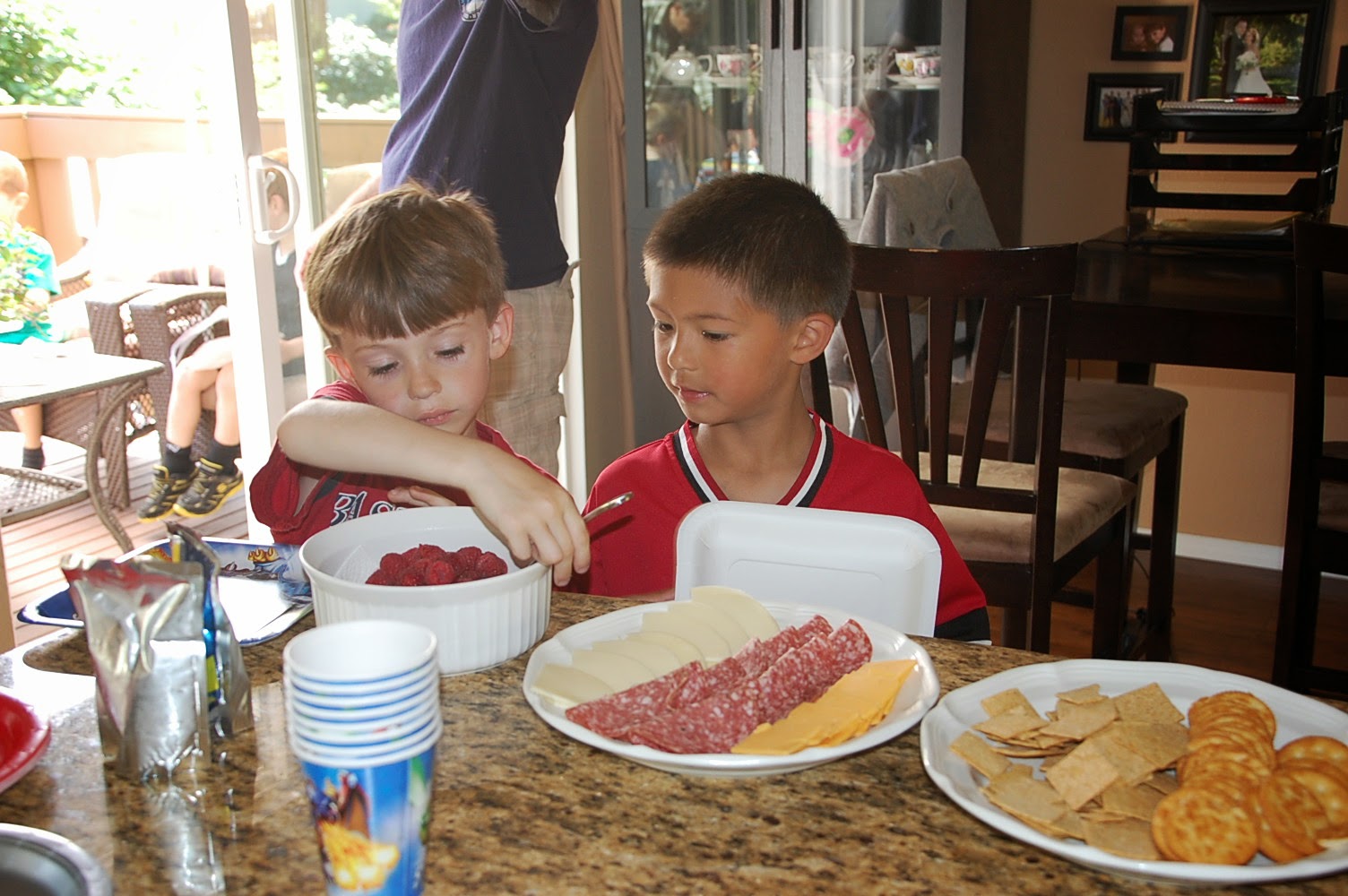 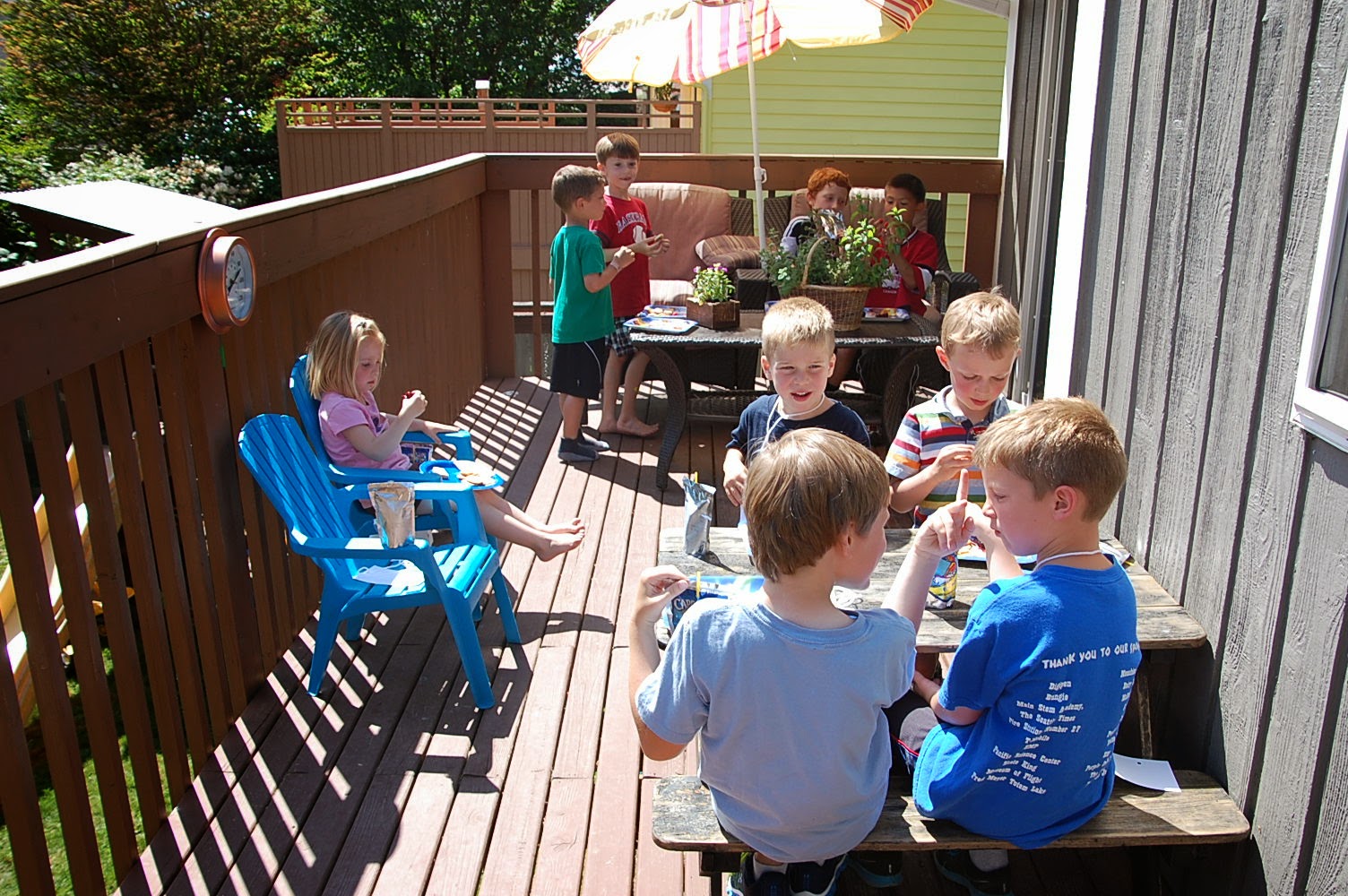 There were lots of smiles, potty talk and laughing. 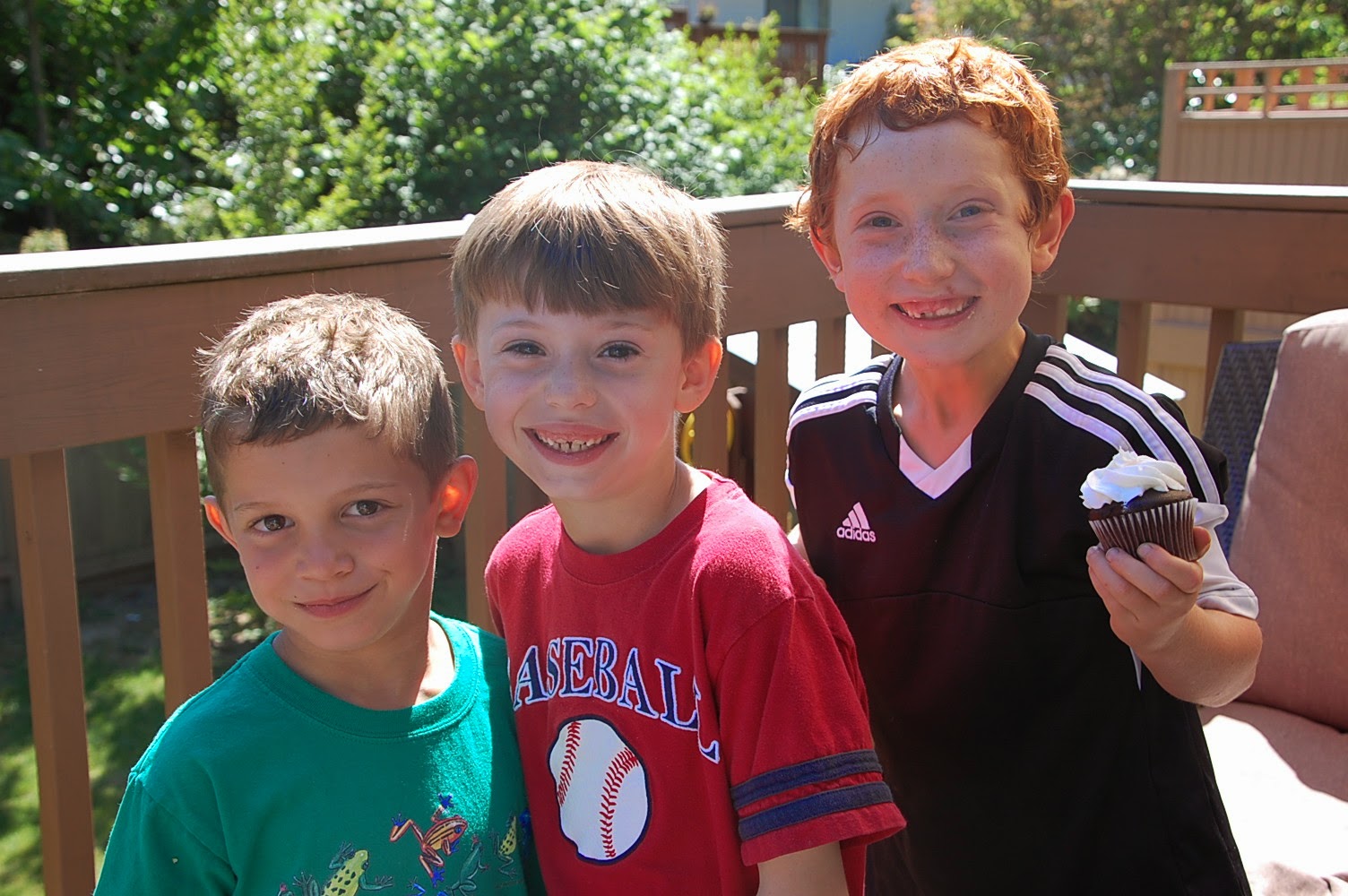 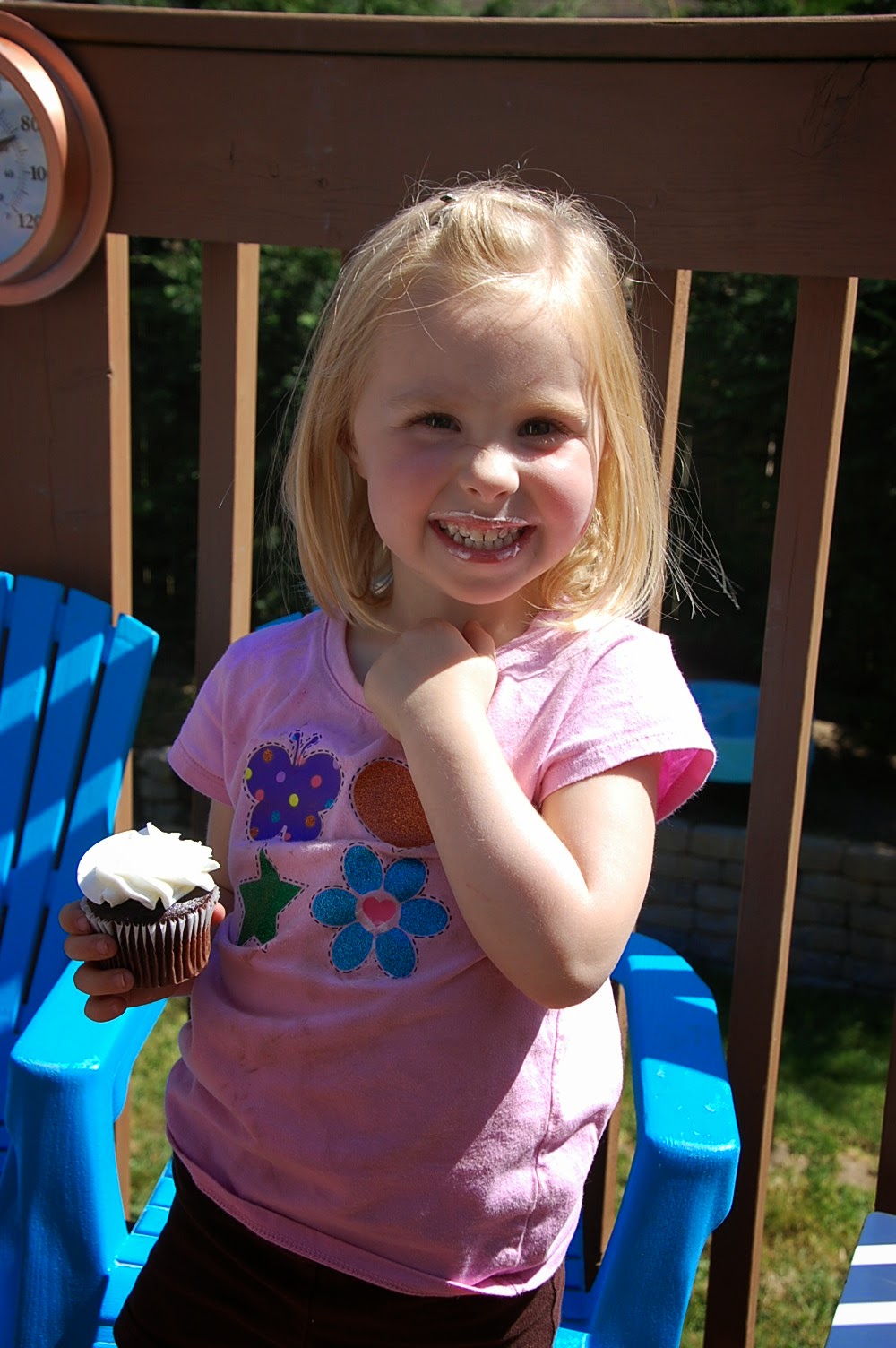 And a little sister just taking it all in. 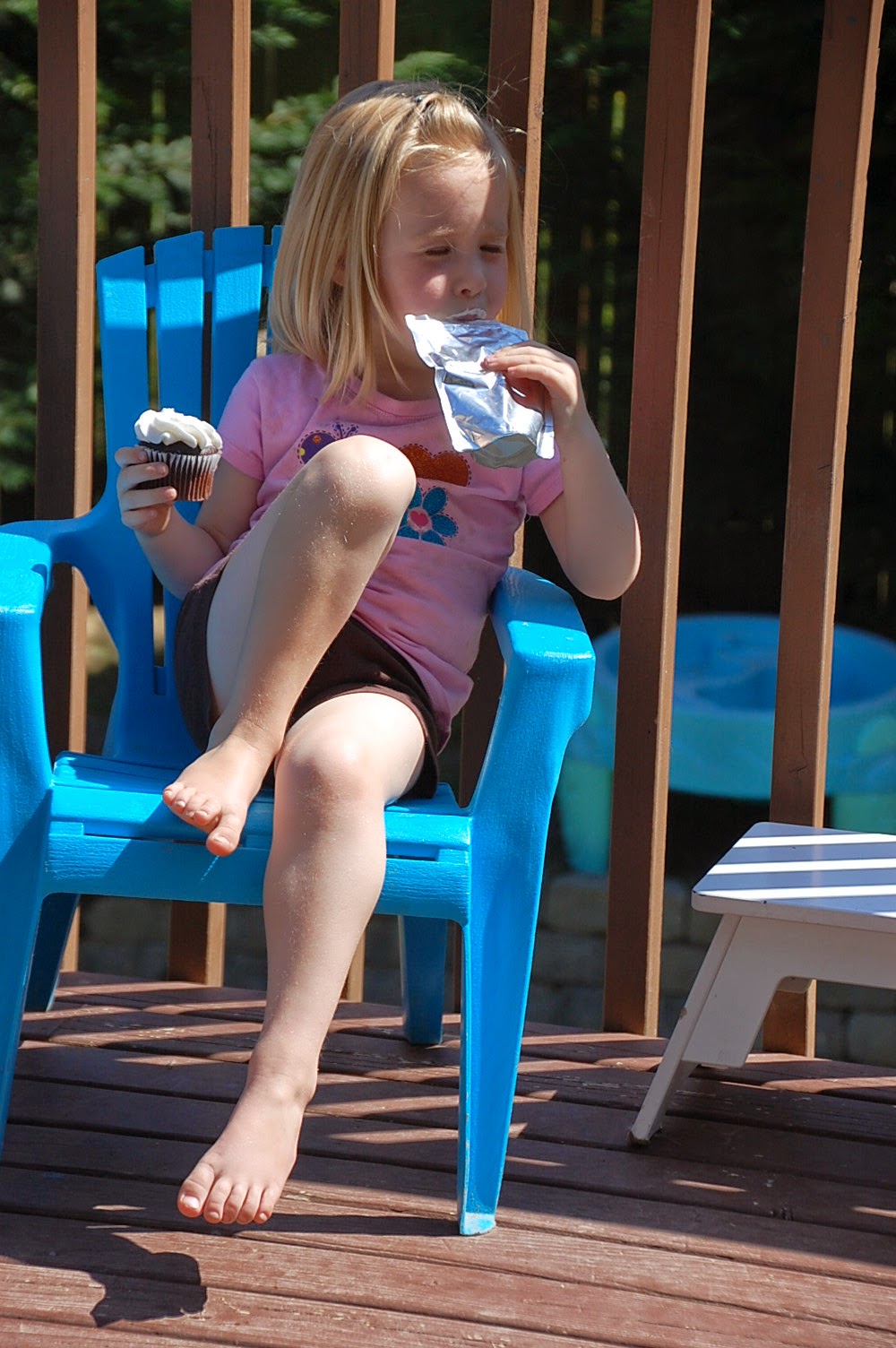 We finished with some gift opening. Followed by utter madness in the backyard. Thank goodness the parents started to arrive. Two hours with 7 boys was perfect timing. 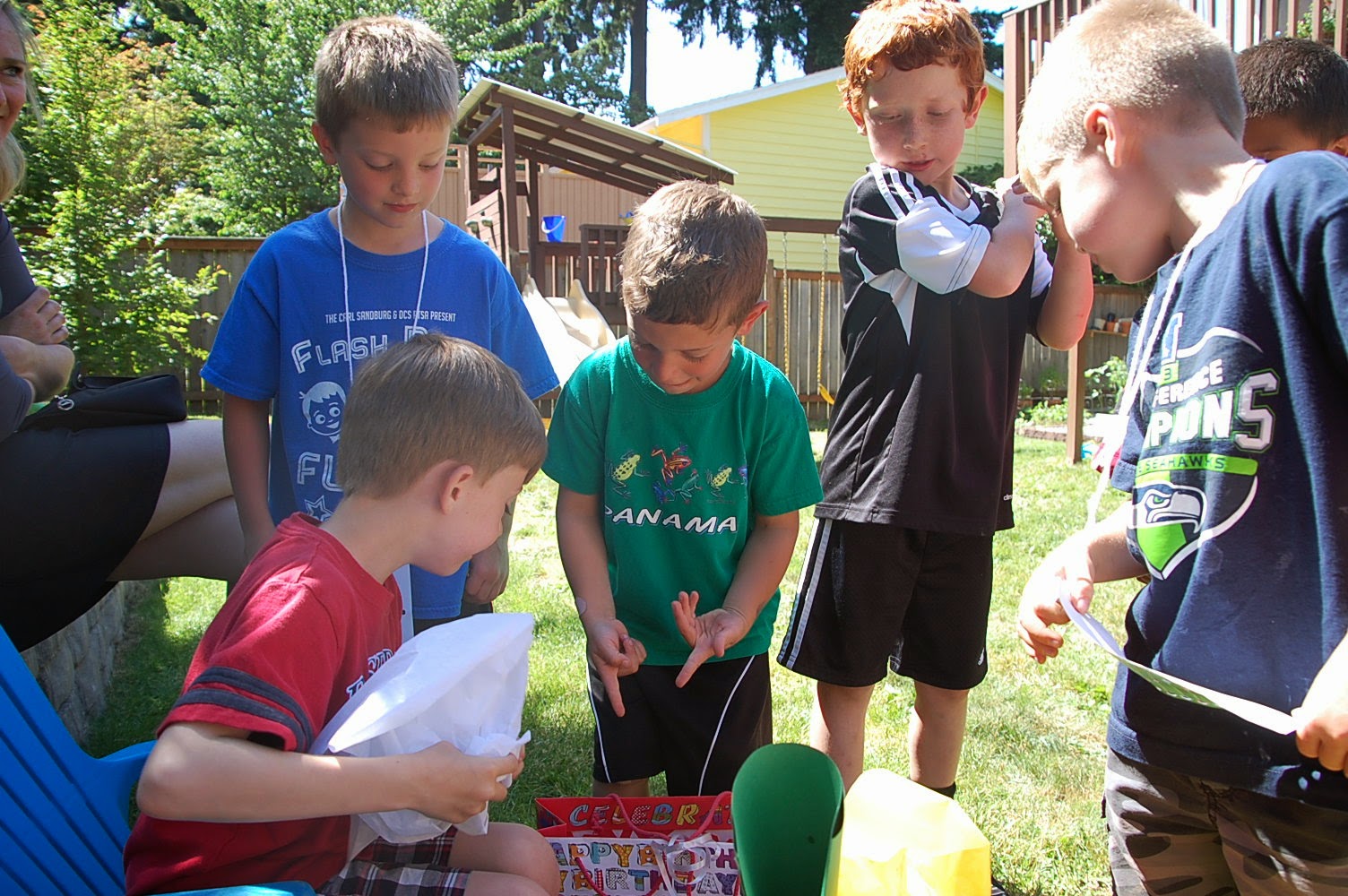 This was the last picture I got before my camera decided to call it quit after 6.5 years (from left to right): Kristopher, Cole, Collin, Callum, Carver, Shane, Ryan and Landon. Truly a bunch of sweet boys. 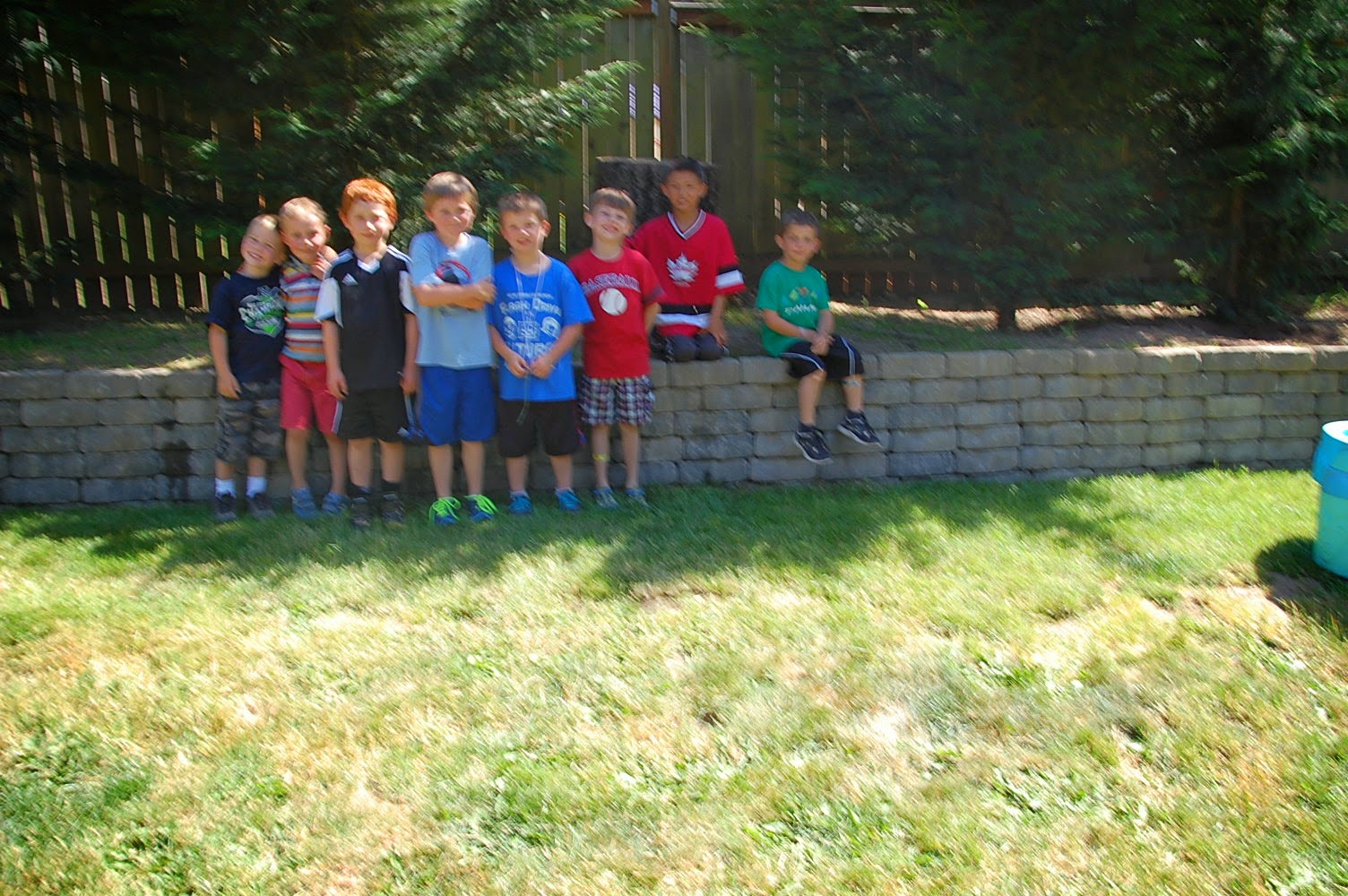 For the past 3 years I've asked the kiddos questions about Kenny for Father's Day. I've enjoyed how they evolve and change over time. Here are this years thoughts about Daddy.

My daddy’s name is Kenny

he is 6 feet tall

he has blond hair and brown eyes

his favorite tv show is the news

he likes to play baseball

for fun he plays with us

his likes to eat tacos

his favorite thing to drink is beer

he works at downtown work

i’ve known my daddy for 7 years

my daddy is happy when I hug him

my favorite thing about my daddy is that he loves me


ALL ABOUT MY DADDY
By Adalyn Booth   Age 3

My daddy’s name is Kenny and Daddy

he is 8 feet tall

he is 8 years old

he has gray hair and golden eyes

his favorite tv show is basketball

he likes to play games

for fun he goes outside

his likes to eat chex

his favorite thing to drink is lemonade

he works at work

i’ve known my daddy for 7 years

my daddy is happy because he loves me

my favorite thing about my daddy is that I love him

Interviews from 2013 & 2012
Posted by Jessica at 7:32 AM No comments:
Email ThisBlogThis!Share to TwitterShare to FacebookShare to Pinterest 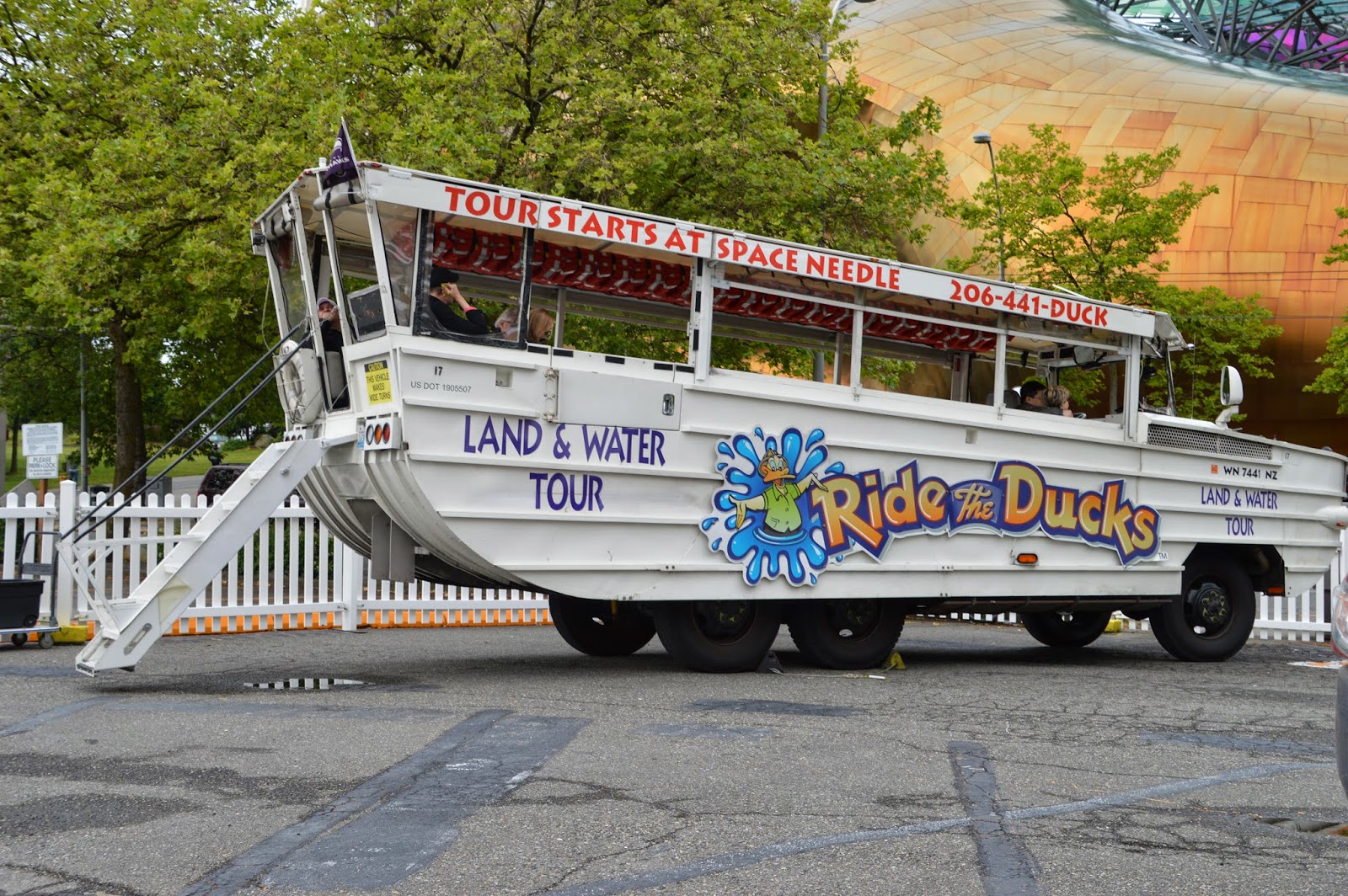 Why not "Ride The Ducks" for Father's Day?! It's been on our to do list for awhile, we just needed little Adalyn to be able to sit for 90 minutes. Which she was able to do just fine. Whohoo for kids that are growing up. 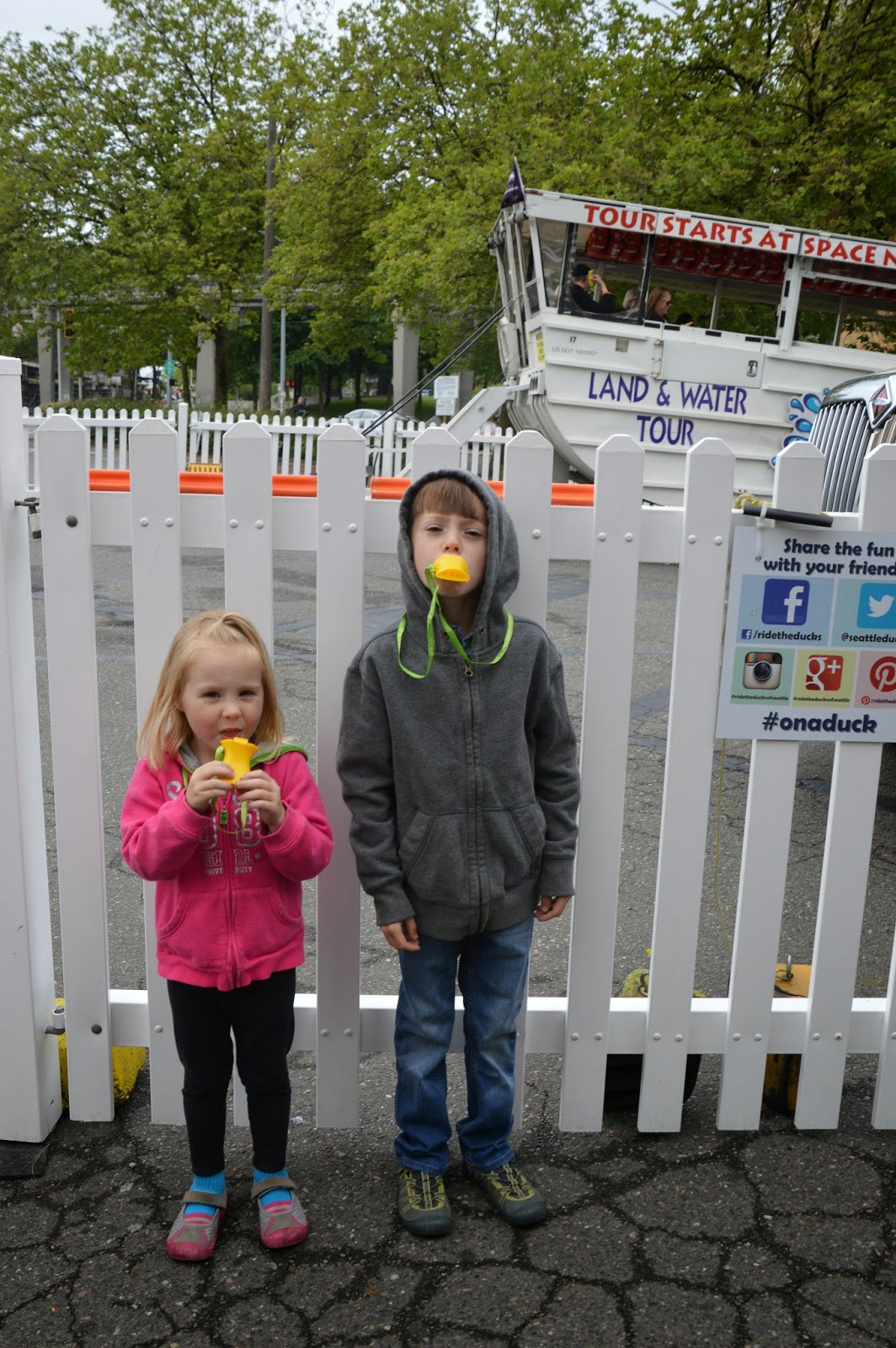 My fabulous SLR camera bit the dust during Shane's birthday party a week before Father's Day. I had just gotten a new one and I was excited to put it to the test. 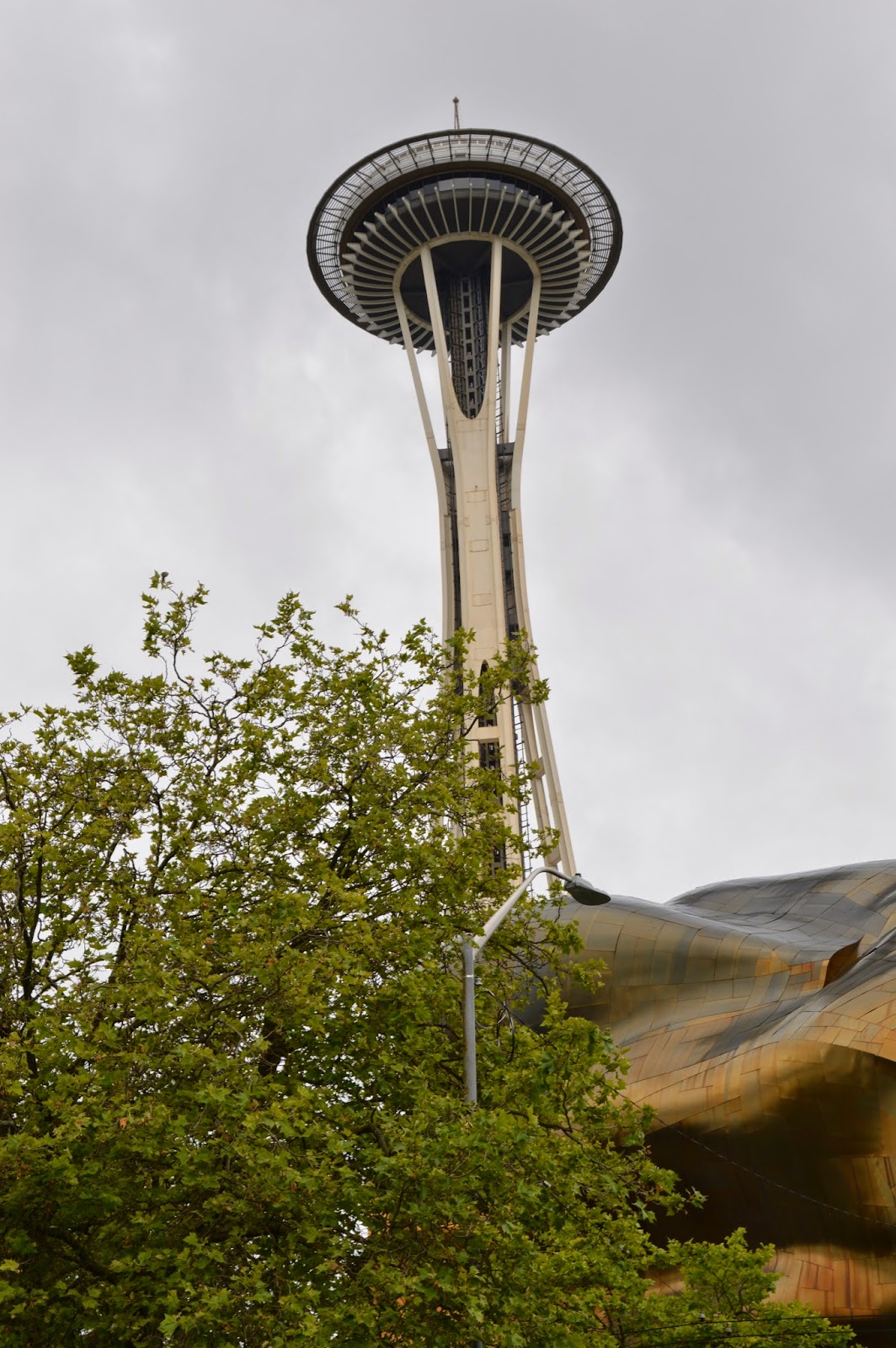 The "Duck" head quarters was near the base of the Space Needle. 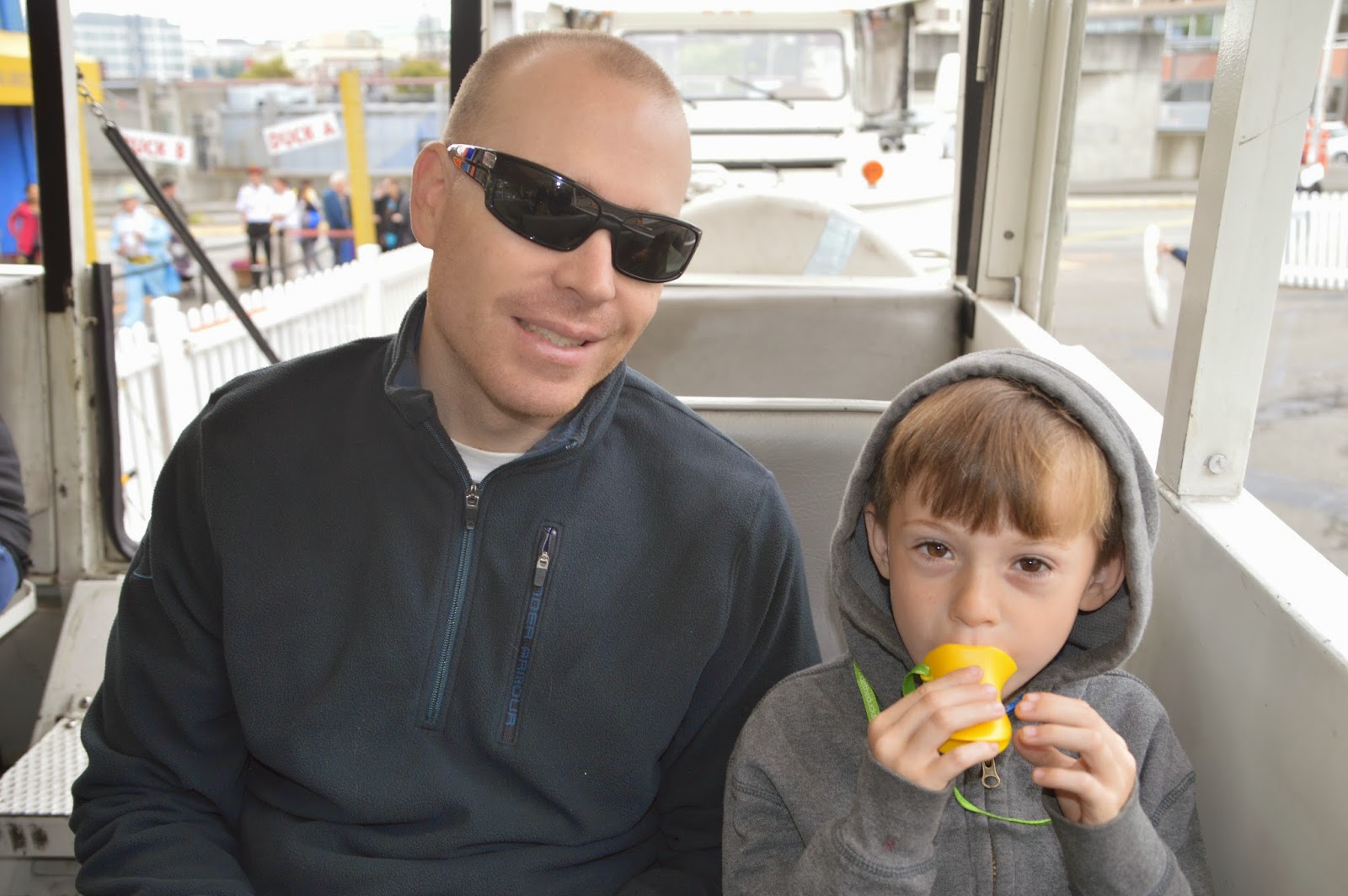 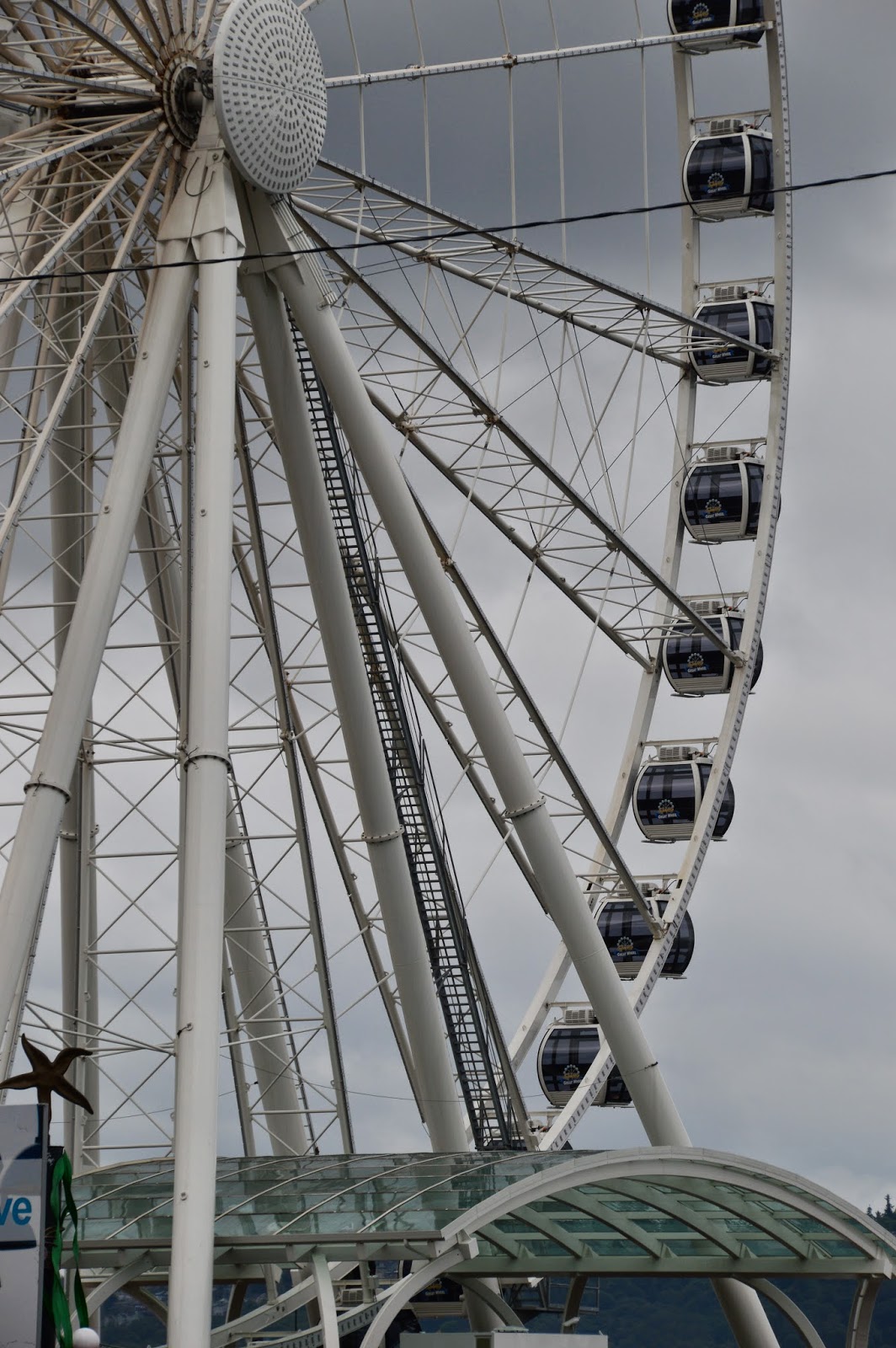 We started the tour by doing a loop downtown and catching some of the sites.
Kenny and Shane have plans on riding this together sometime.
I won't be joining them for that adventure. 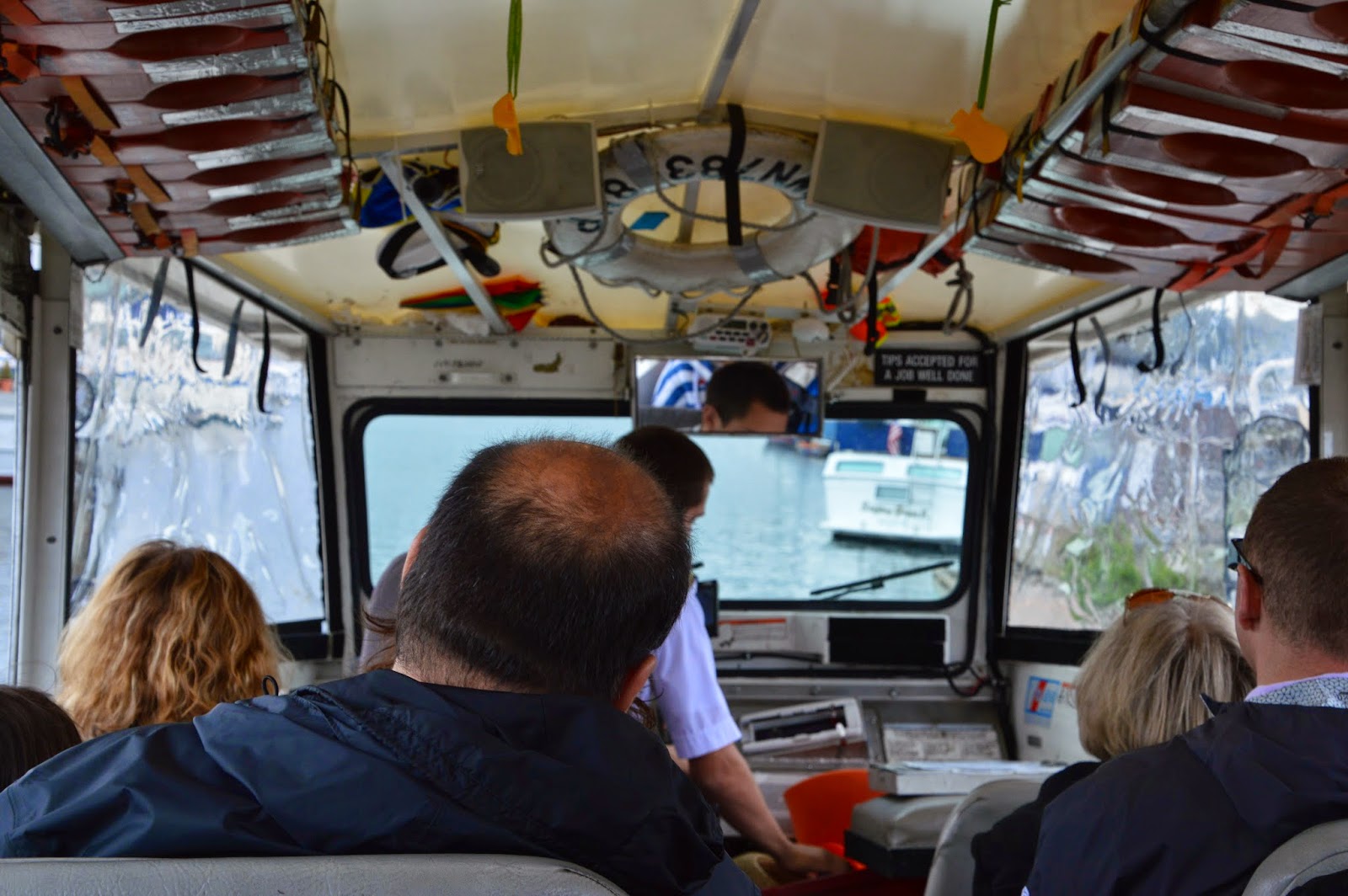 Then we drove right into Lake Union. Man, that was a tough one for me.
I had knots in my stomach the whole time we were in the water.
We just drove right on it. Craziness! 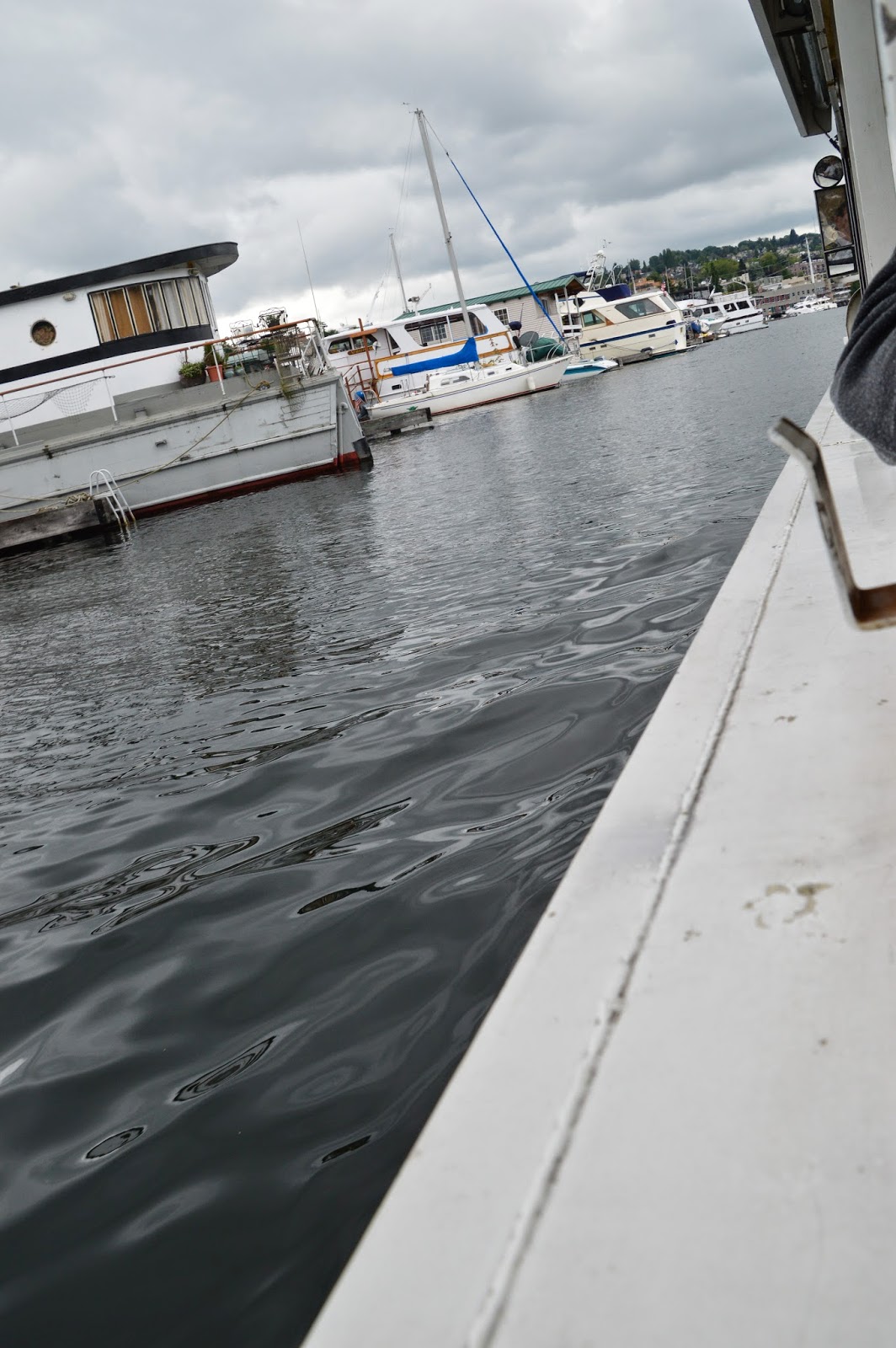 I think what got me the most was how low/close to the water we seemed. 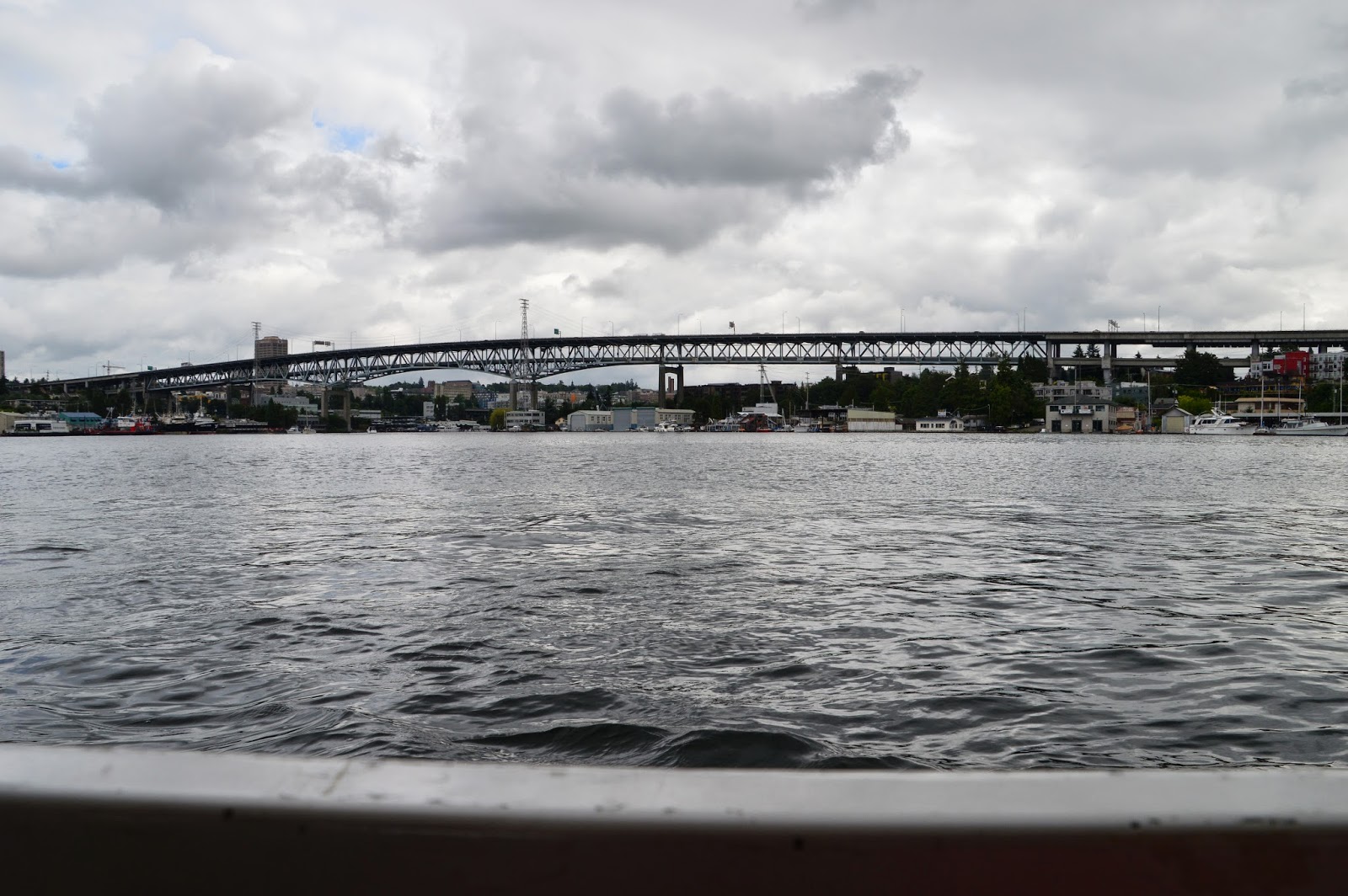 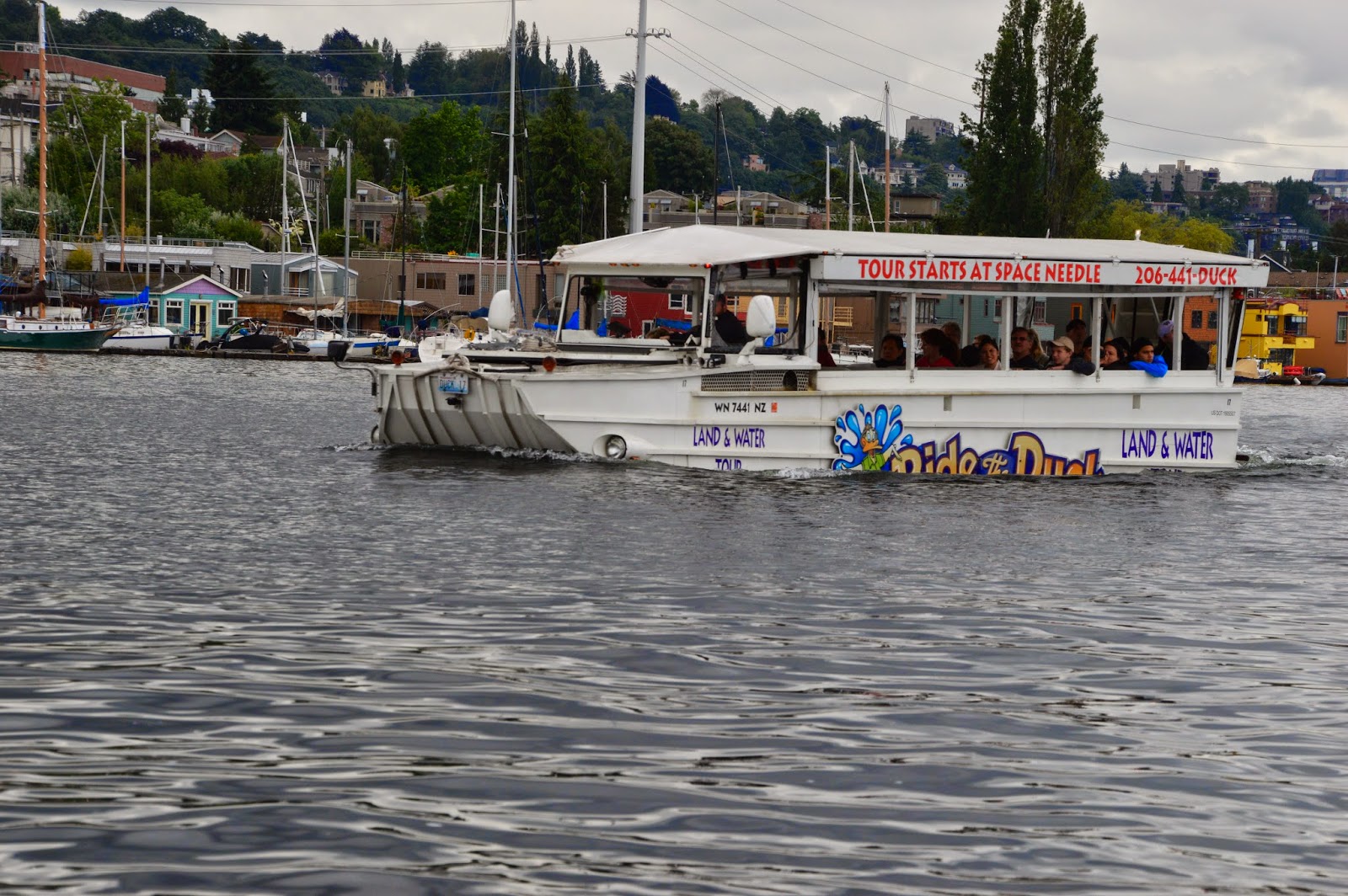 There were "Ducks" everywhere. 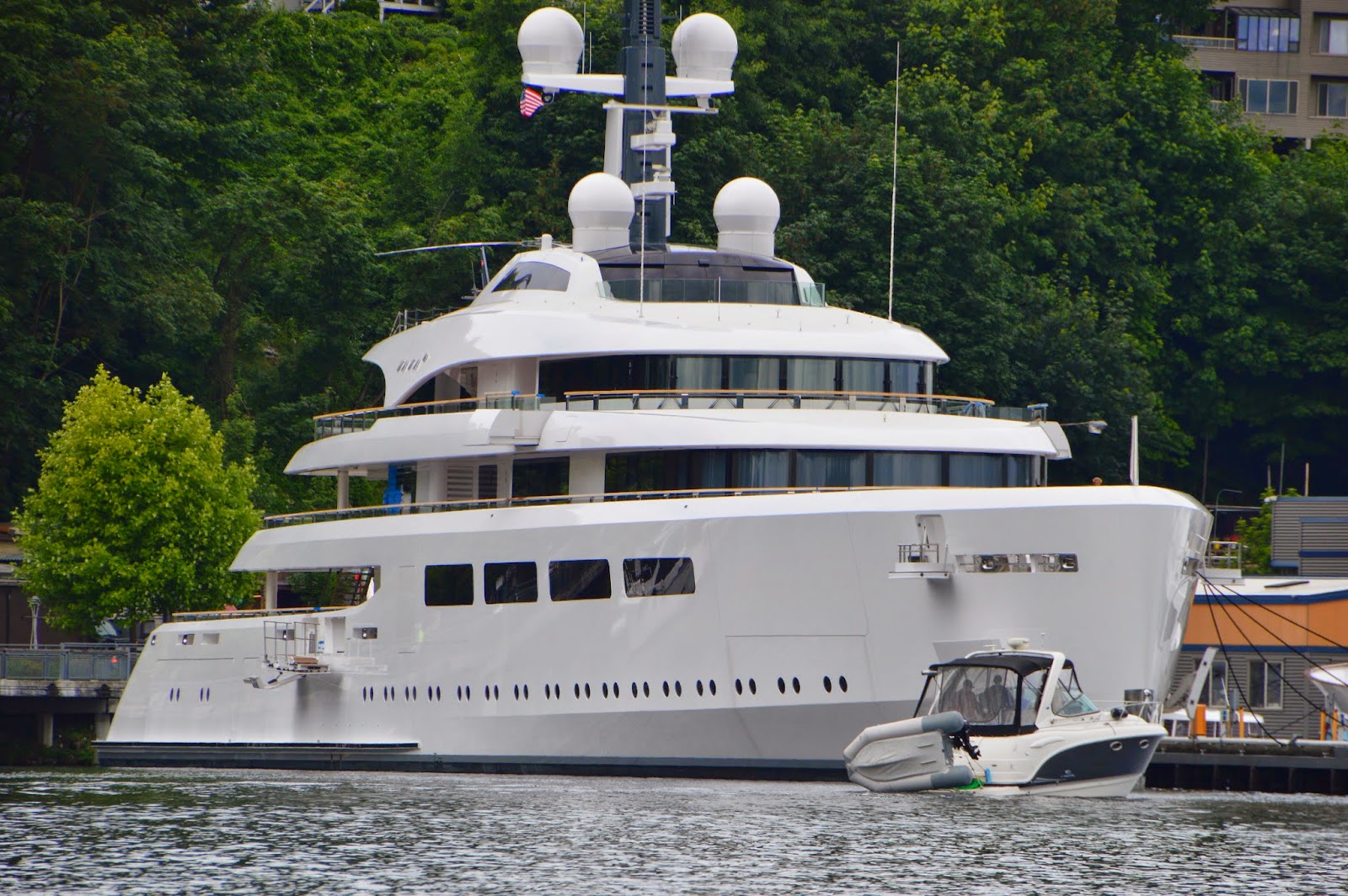 There was this little yacht hanging out before it heads up to Alaska for a bit.
It's 300 feet long (aka a football field) and the value of it is estimated at $160 million dollars.
When the tour guide asked how much someone that it would cost a lady guess 1 million.
Kenny still laughs at that. 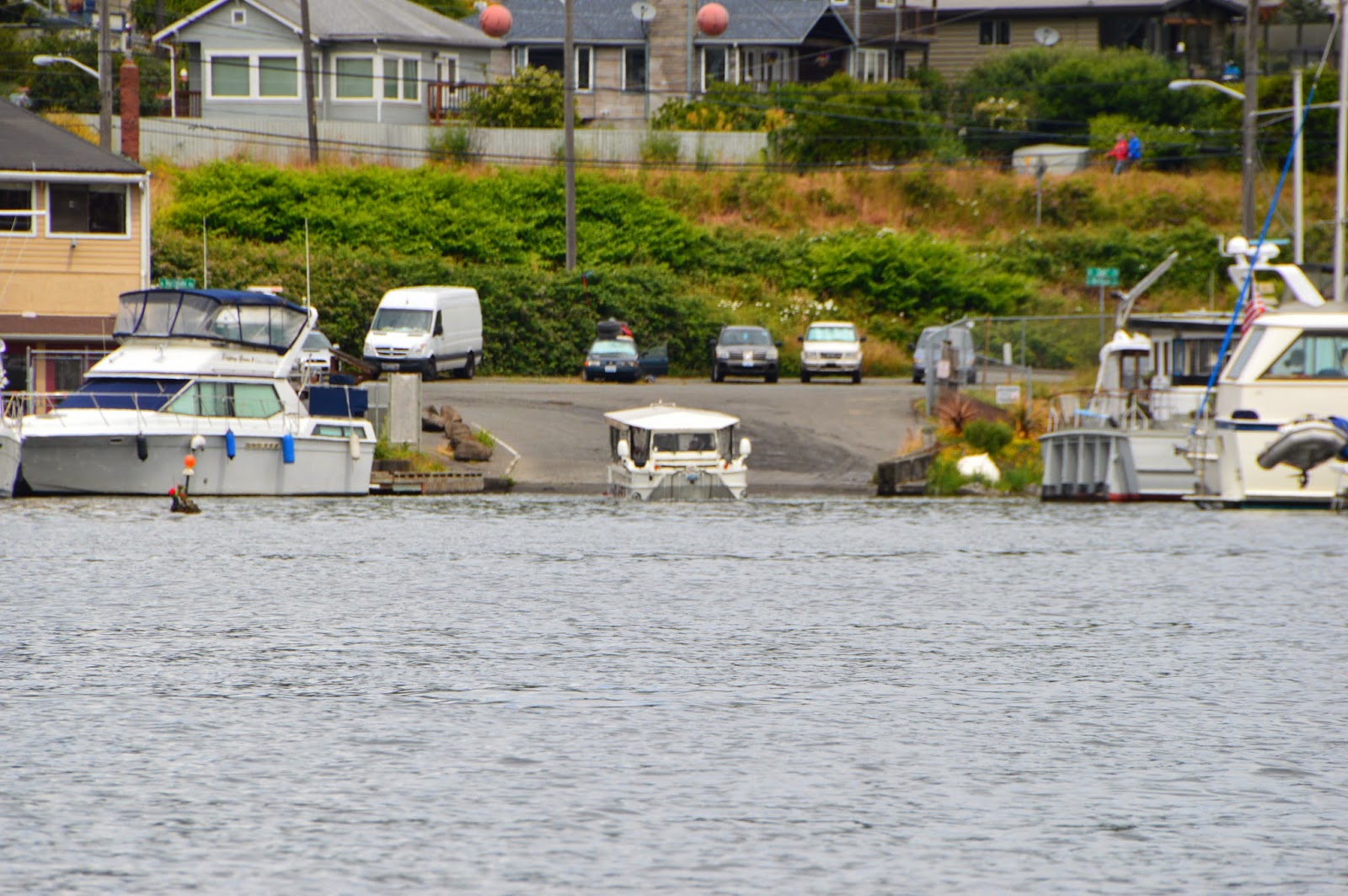 This is what it looks like driving into the water. We were headed back out.
Phew! We didn't sink!!! 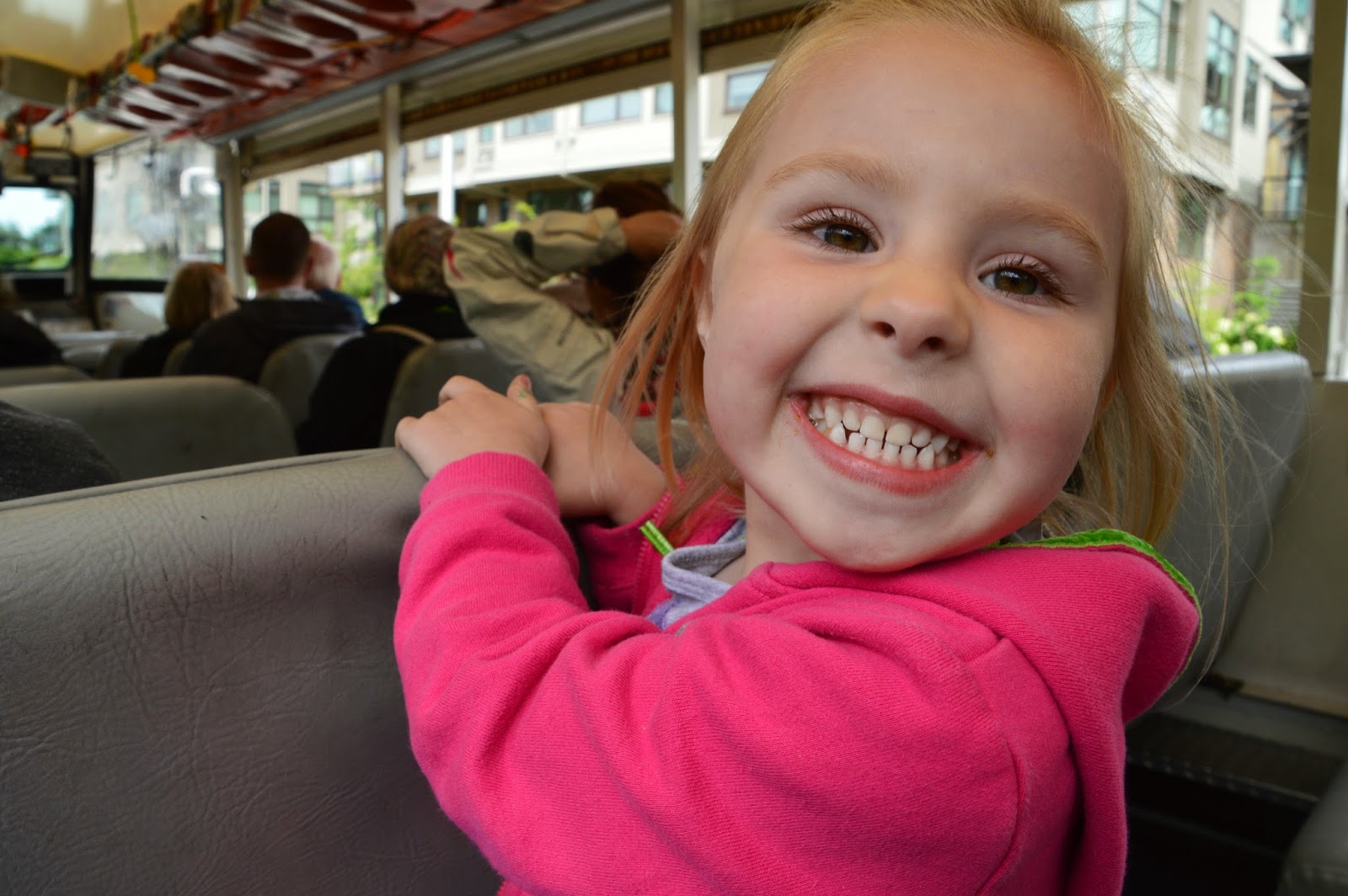 This little bugger was grumpy and "not having fun" for the first hour.
She sat in my lap and pouted.
Then we got in the water and everything turned around.
Then she was "happy".

Overall a fun thing to do with the family. We followed this up with dinner out at Tipsy Cow Burger Bar in Redmond and a visit to a park. Good times! Happy Father's Day, Kenny! Thanks for being a rockin' Daddy-O.
Posted by Jessica at 7:25 PM No comments:
Email ThisBlogThis!Share to TwitterShare to FacebookShare to Pinterest

Two days left of Shane's kindergarten school year. Wasn't it just yesterday that he had his first day? That kid has rocked kindergarten. We are so proud of him. It's truly hard to even explain how far he has come in the past 12 months. It was right around this time last year we were enrolling him in an anxiety program called Coping Cats. 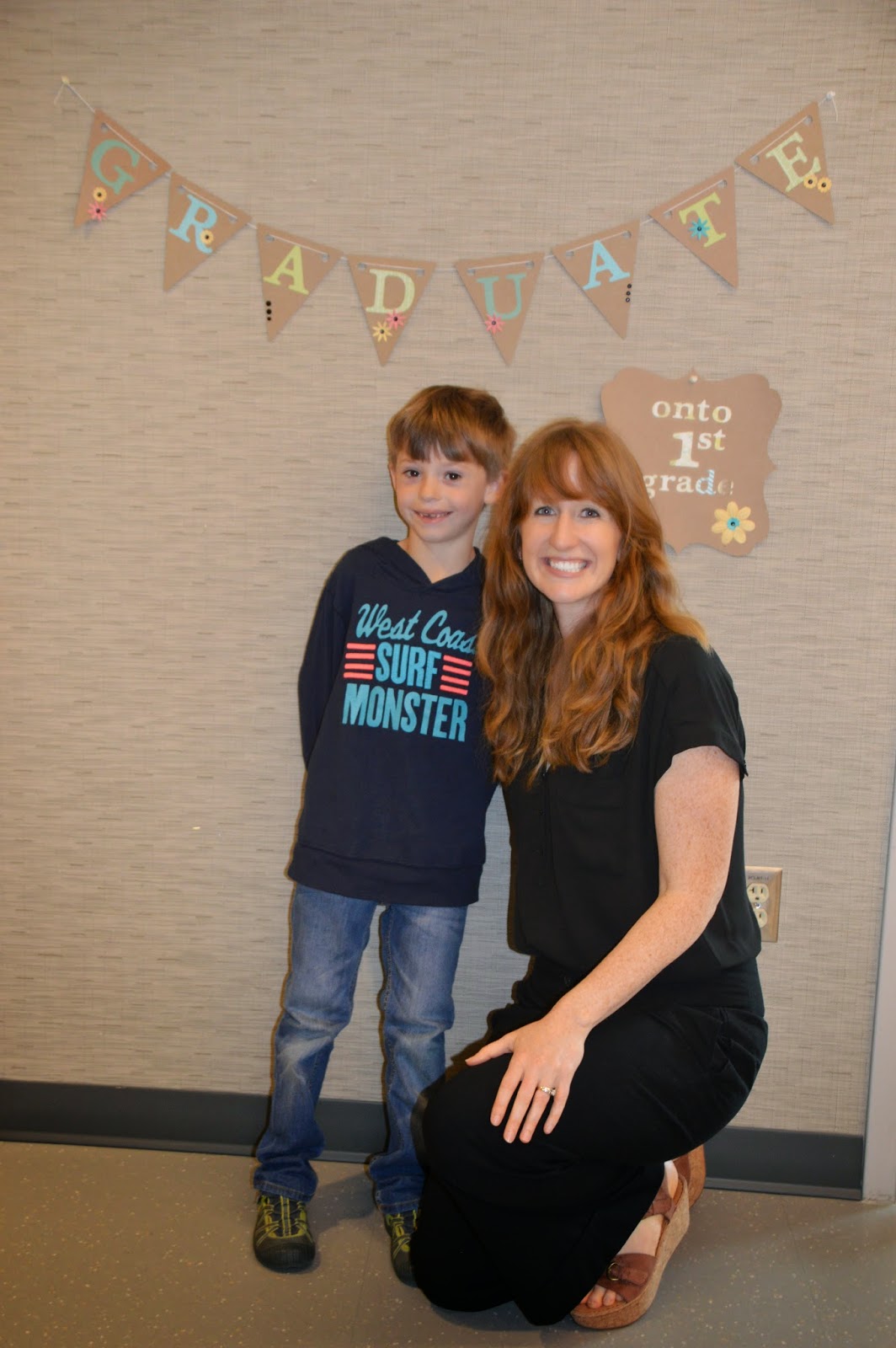 Sixteen weeks later and the arrival of his first few weeks in kindergarten we knew that Shane had developed some awesome new coping skills. His anxiety of new places, transitions and loud groups has slipped away. He can now do an amazing long list of things that we weren't sure a year ago he would be able to accomplish.

Things like being dropped off at school in the car line, going on play dates with out me, riding home on the school bus to a friends house, going to the zoo with a friend and his Mom with out me around, and happily playing at recess. He even survived one day when I was the last one to pick him up from school. He looked at me with big eyes, standing next to his teacher, and said "I knew you were coming. I wasn't worried at all." He has accomplished these things and more.

He wants to be at school the minute he can be in the morning. He wants to play "recess" before school starts. He wants to play soccer with the "big kids". He has soared in math this year. It comes very natural to him and he enjoys it. His teacher, Mrs Fornia, has helped him grow his artist skills above and beyond imaginable. He has made fantastic friendships and easily transitions from group to group and friend to friend with out any issues. Oh and he can read, too. Man, what a year this has been!

This morning we attended his kindergarten graduation. I was asked a couple times if I needed a kleenex or would be teary eyed. Nope, not this Mama. I was so excited to see this day come and I'm even more excited to see my little man grow and learn in his next adventure of 1st grade. 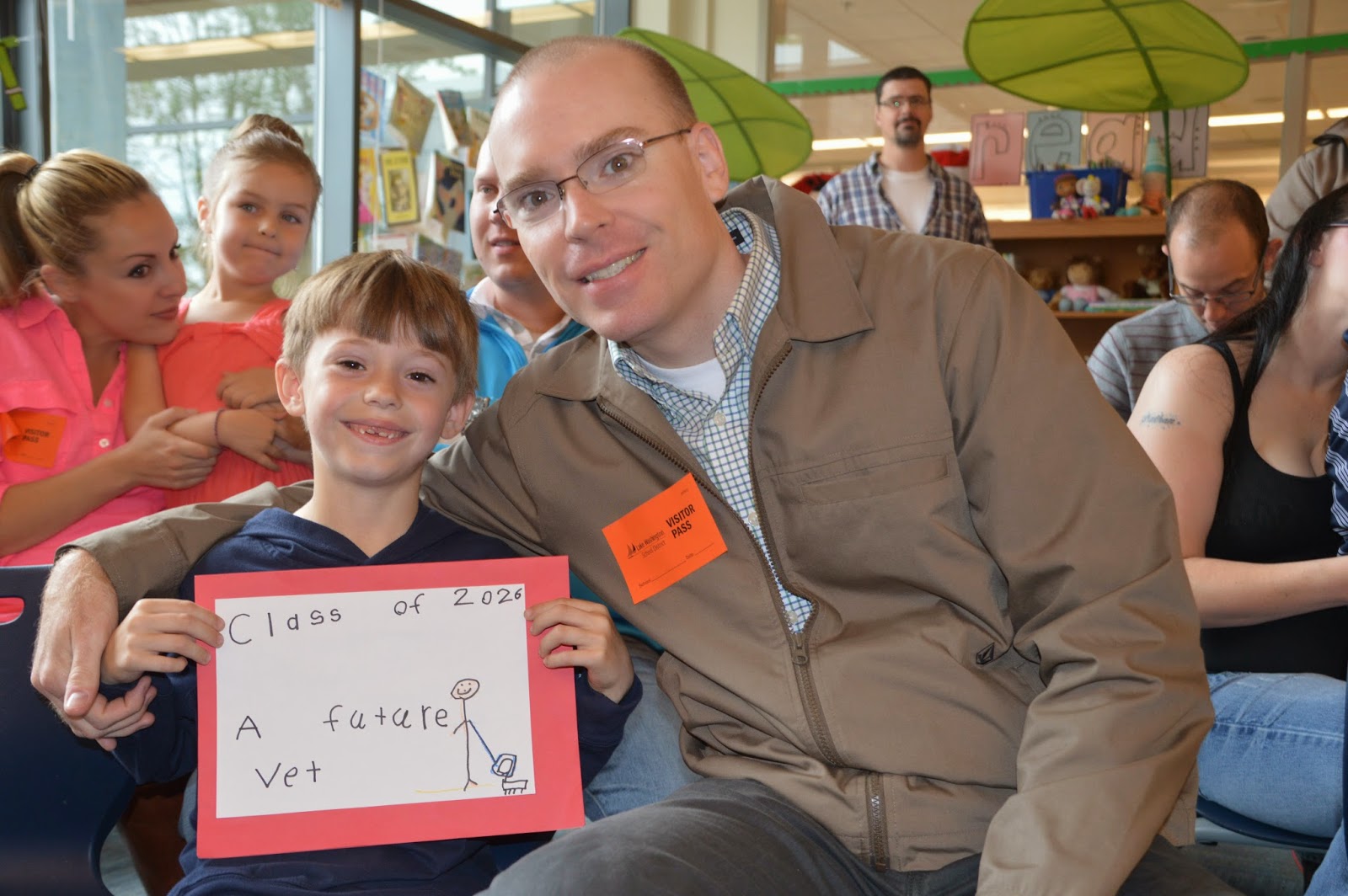 Here are a few videos from the mornings events:


The kids were all asked what they learned in kindergarten this year, Shane answer:
"Don't be afraid of math, math is fun."